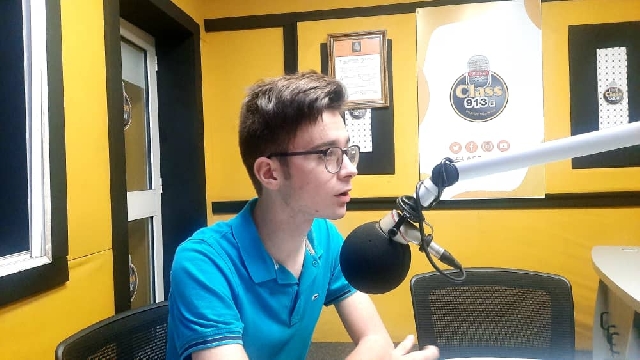 Since October 2021, I’ve been living here in Ghana, just outside the vibrant city of Accra, in a Student Home together with a group of other volunteers, all working in different projects across the city. Now, after almost two and a half months, it’s time for me to go home. What’s following now, is a quick recap of my last weeks in this energetic, beautiful and so vastly different country, from covid-related complications to a frenetic new year’s celebration in Osu, as well as a final reflection of my time in Ghana.

I planned to work at the Class Media Group for the entirety of my stay here in Ghana. My internship has been a highly interesting and rewarding experience, as I was able to extend my journalistic abilities and get an in-depth look at the work in a radio station.

Along the way, I also met some great people who made sure I was integrated well and was able to work on important tasks. That was, until about two and a half weeks ago, before things unravelled. I and a few other volunteers went to Ada Foah for the weekend, where we stayed at a beach resort on a beautiful peninsula. The weekend mostly consisted of relaxing at the beach, but we also did boat tours and a rum tasting on one of the small islands (the rum is extremely strong by the way). But then, troubling news reached us from Accra. Some of the volunteers who were left behind in the Student Home had tested positive for Covid-19. That was alarming, as during the weekend also, some of us in Ada had developed symptoms such as a sore throat and a slight cough.

We left for Accra on Sunday and got tested immediately, the results came back positive. Now, it was impossible for us, as well as the other positive volunteers, to stay in the Student Home, so we headed out to a Guest House and, after one night, switched to an Airbnb to isolate ourselves in. As going to a supermarket was out of question, we normally ordered food or had goods delivered. After eight days since the beginning of the symptoms, the tests were still positive, so we switched to another Airbnb until on the 30th of December, roughly two weeks since we noticed the first traces of Covid, we all got negative results and returned. Of course, being damned to stay in isolation with six people in a small flat is hard. Still, despite us being crammed in an Airbnb for two weeks, we got along, watched movies, listened to music and celebrated a very modest Christmas.

To all the people who were in isolation with me: you all handled the isolation so well, you can be proud of yourselves! Even more importantly, nobody became seriously ill, the most severe symptom being a slight fever. And of course, being in isolation far away from home was quite an experience for all of us, I think we really learned something about ourselves as well as about others.

When the Covid chapter was finally over, we came back just in time to celebrate the New Year. As some volunteers have good connections to locals, we managed to get free access to a rooftop party in the district of Osu, which, due to its cool bars, clubs and restaurants, maybe is my favourite area of the city. The vibe at the party was great, with people singing and dancing ecstatically while fireworks and flashing lights illuminated the sky. After the New Year came around, we drifted through Osu from one club to another, which proved again that in Ghana, you can celebrate like in few other places in the world. After the holidays, I was finally able to return to Class FM for one final week.

What a time it has been! I arrived here with mixed feelings, on one hand really looking forward to experiencing a new country, a new continent even and working as a journalist, but on the other hand also with a sense of awe, as I was aware that the time in Ghana would certainly be rewarding, but also challenging. I’ve never been in such a country before, so living here required quite a bit of adaptation. Trivial things, such as getting to work in the morning or finding the right Trotro had me dumbstruck at first, but after a bit of getting used to, everything worked out well.

The most important rule is communication. If you don’t know where to go, ask the locals, many are happy to help you. Ghanaians certainly are some of the most hospitable people I’ve ever met, and this open-mindedness towards strangers certainly makes you feel much more secure and welcome. Yes, the lifestyle certainly has some flaws and inconveniences, such as huge traffic jams or power outages. This may be annoying at first, I remember getting extremely unnerved after spending almost two hours on my way to work, but honestly, is there any use in complaining? After a while, I just learned to deal with it. Focusing on the good things is key. And luckily, Ghana has a lot of those.

We had amazing trips throughout the country, seeing some of the most beautiful places around. Hiking through the Kakum National Park in the early morning, seeing gazelles running through the savannah in the Shai Hills or enjoying a coffee at a beach resort in Cape Coast are amazing experiences I surely won’t forget. But most of the time, I spent in and around Ghana’s capital, Accra. What a city. I rarely have seen so many cultural facets in one place, from the bustling markets to the awe-inspiring Black Star Square and the shimmering tower that is No. 1 Oxford Street. Life doesn’t cease in the night, it keeps going with the same intensity. All classes, races and cultures collide in this city that surely never sleeps.

Now it’s time for me to go back to Germany. The two and a half months in Ghana have been exhausting, demanding, a time of personal changes and big decisions to be made. But I wouldn’t want to miss a single thing. I’ve met some great, special people, other volunteers, with whom I’ve been living the entire time, as well as the team at Class FM, who made my internship a really special experience. Working at a radio station was entirely new for me and still I never felt useless or like a burden to the others, but like a real team member.

To the entire Class FM team: I’ll be forever grateful for letting me work with you, I surely won’t forget it. Thank you for an extremely fun and enlightening time. Also, thanks to all the other volunteers, I really had a blast with you all. All in all, it was a truly special time. People at home always asked why exactly would I go to a country like this, but until now, I’ve never doubted my decision. Now, there is not much to say for me anymore, except good-bye. Until we meet again, Ghana!