One year one: Amidu eulogises Rawlings 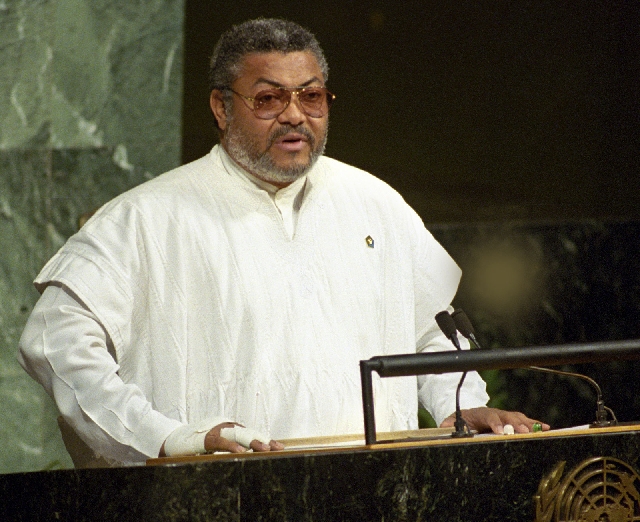 In my lived experience, there is no Ghanaian Head of Government or Head of State who can compare with the late Comrade Chairman, and President Emeritus Flt. Lt. Jerry John Rawling in terms of the exhibition of the highest degree of integrity and honour in the management of the public affair of this country for the common good of its ordinary citizens since independence on 6th March 1957, except the Osagyefo Dr Kwame Nkrumah.

In terms of management skills in all facets of our governance as Head of State, including an in-depth understanding of the statecraft of our national and international relations, the life of the late President Emeritus Flt. Lt. Jerry John Rawling compares in our circumstances only to the late statesman and British Prime Minister, Sir Winston Churchill, who also did not have all those highfalutin certificates or university or college degrees. It will take this country a long time for another President who understands the ordinary Ghanaian psyche and empathizes truly with his compatriots to emerge to salvage our decaying democratic situation under the Constitution.

The late Comrade Chairman and President Emeritus Rawlings like all of us was a human being: he naturally had human weaknesses, and some of the actions taken under his leadership to restore the sanity and dignity of our decadent political system may have hurt others, and sometimes fatally. However, within the dialectics of the unity or identity of opposites in nature and man, Jerry John Rawlings’ integrity and honour in this life far outweighed any human weaknesses he had. The facts are evidentially demonstrated by the extent to which those who had exhibited disdain to his regimes when he was in office as Ghana’s Head of State turned round to opportunistically assimilate and integrate his personality and successes into their regimes.

This in memoriam I am writing dedicated to him on the first anniversary of his demise will only serve any useful purpose when those committed cadres who started with him under the 4th June, and 31st of December Revolutions, and served in his Governments under the Fourth Republican Constitution remember at all times that part of the work we started together until his demise on 12th November 2020 remains unaccomplished.

First, several reverses have taken place since 7th January 2001 against the interest of the ordinary people of Ghana as enshrinined under the 1992 Constitution. This country cannot make any meaningful progress in the absence of a strict commitment to probity, accountability, and transparency in governance as mandated by the 1992 Constitution that the late President Rawlings bequeathed to this nation. Secondly, the Rawlings’ social democratic tradition was to ensure genuine political, financial, and economic transparency in the handling of our common patrimony which is the democratic representative electoral process, the national purse, and the management of our collective natural resources. These are at their lowest ebb as at this first anniversary of his demise and renders at nought all the struggles for a better Ghana as the Black Star of Africa since independence.

The occasion of this anniversary, for me, is a reminder that unless and until the genuine comrades, colleagues, and younger supporters of our departed President Emeritus Rawlings bury their differences, (which was manifest long before his demise) and unite, the social democratic tradition he initiated and sustained in his lifetime would elude the ordinary Ghanaian whom he so strenuously led us to fight for and defended to his last breath on 12th November 2020. Acrimony as to who truly represents the 4th June or 31st December Revolutions or the social democratic tradition has been and is being stoked to divide and weaken the social-democratic cause of the workers and people of Ghana Comrade Rawlings dedicated his life to.

May the remembrance of our dear late Chairman and President Rawlings today touch the hearts of those who have inherited his mantle to reach out to every cadre and member who had associated with him during his lifetime and to bring unity amongst all his accolades. This cannot materialize without seeking to reconcile with his dear wife without whom the social democratic tradition he epitomizes would have died in 1992 in the transition to Constitutional governance. The tremendous contribution of his dear wife, Nana Konadu Agyeman-Rawlings, including the late Mr Justice D. F. Annan and others, to the sustenance of the 31st December Revolution and his two Governments under the Constitution, deserves to be known and appreciated at the appropriate time of his remembrance.

His dear wife needs to be engaged notwithstanding the needless fallouts from Sunyani in July 2011 and after, whatever the cost. All antagonized cadres who remained with the leader till his demise must be engaged and reconciled. Former PNDC Members, Secretaries of State, Ministers of State, Members of Parliament, and other antagonized operatives must also be engaged, and common ground jointly found for a united way forward instead of playing into the hands of the surveillance capitalism of today’s Ghana.

On this occasion of remembering our dear Great Leader, Jerry John Rawlings, let all who genuinely profess to share the President Emeritus’ ideas and political direction remember that the polarization which this nation has suffered for the past years has translated into a further attempt to divide the Rawlings’ heritage for electoral purposes. This has been enabled by the monetization of politics which President Rawlings decried during his life and which this country has never seen before in its history.

Jerry John Rawling will forever live on only when those of us holding ourselves out as his former comrades, friends, and colleagues put our differences aside for the sake of uniting in his memory to carry high the torch he lit on 15th May 1979, 4th June 1979, 31st December 1981, and 7th January 1993. This must be a total commitment without hypocrisy or double agency. In unity and strength, the light of the 31st December Revolution and the 1992 Constitution bequeathed to Ghana by President Rawlings will continue to shine and lift high the Black Star of Ghana and Africa. President Rawlings in his lifetime always put Ghana First in actions and deeds, and Ghana can only succeed when comrades, colleagues, friends, and supporters continue in his stride to always put Ghana First. Jerry John Rawlings lives on!