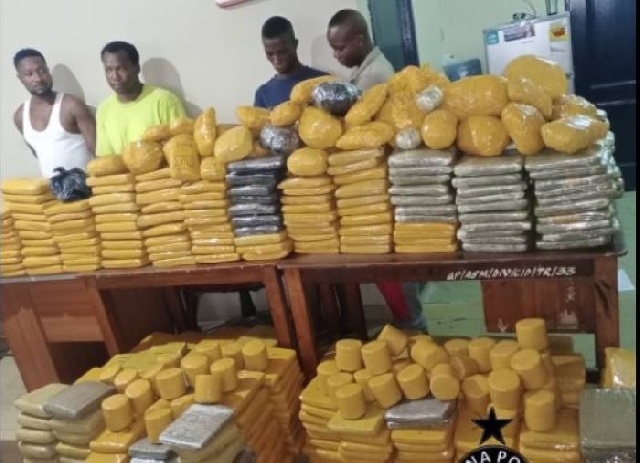 Suspects with items suspected to be narcotics

Police in Ashaiman on 4th June 2021 arrested four suspected narcotic dealers who were conveying 892 slabs of plant material suspected to be narcotic drugs in a Benz bus with registration number GR-2913-G to Carl's Hotel located at Bethlehem-Ashaiman.

They have been detained for further investigations and due processes.

Meanwhile, Police in Kibi have arrested two people who attacked tomato traders onboard KIA Rhino Truck with registration No. GC 328-11, which was loaded with tomatoes and traveling from Akyem Begoro in the Eastern Region to Ashaiman in the Greater Accra Region.

The suspects, Haruna Amadu aged 25 and Joseph Nyira aged 25, attacked the traders at about 0400 hours of 6th June 2021 at Bunso Site 2 on the Bunso-Osiem Highway, also in the Eastern Region. They robbed the five female traders of their monies and bags at gunpoint. One of them also shot one of the traders called Victoria in the head, killing her as a result.

The suspects fled into the bush after the operation but Police upon learning of the incident pursued them in the bush and arrested the suspects with the support of community members.

Items retrieved from the suspects include two unregistered single-barrel shotguns, a machete, bags, voter ID Cards and assorted mobile sim cards some of which belonged to the victims. Suspects and exhibits are in the custody of the Police, pending processing for Court.