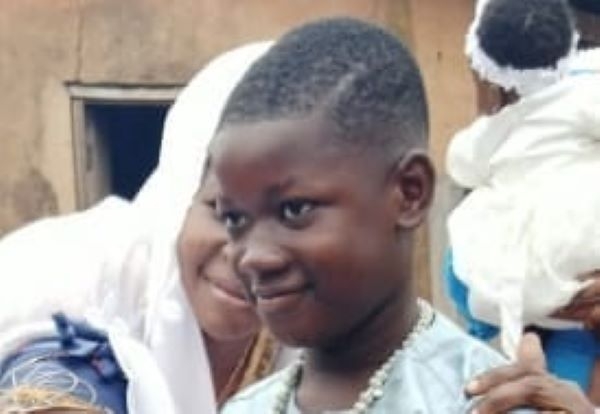 Eleven-year-old Ishmael Mensah’s body has been released to his family and buried on Thursday, 8 April 2021.

The Class 4 pupil was killed by two teenagers in Kasoa, Central Region, for ritual purposes.

The suspects are in the grips of the police.

The police released the body after an autopsy was done.

The family had clamoured for the body earlier so as to bury it in accordance with Islamic tenets.

Apart from the two teenage suspects, two others connected to the killing have also been picked up.

They include a fetish priestess and a man.

A team of investigators arrested them at Amanase near Suhum in the Eastern Region.

Meanwhile, the Ghana Catholic Bishops' Conference (GCBC) has said the incident makes it important for there to be an urgent reflection on what has gone wrong with us as individuals, a people and nation.

A statement signed by the President of the Ghana Catholic Bishops' Conference, Most Rev. Philip Naameh, on 8 April 2021, indicated: “This sad and gruesome incident, which took place at a suburb in Kasoa in the Central Region, exposes us as a people and as a nation, and calls for the need for an urgent intervention to avert further occurrences in the future”.

“The horrid action of these teenagers should serve as a wake-up call for us to find out what has gone wrong with us as individuals, as a people, as a nation and why we are where we are today”, the Bishops’ Conference said.

“Perhaps, we have lost our moral compass as individuals, a people and a nation,” it added.

The statement continued: “As we dialogue to have answers to the question: 'What has gone wrong with us?' it is important for us to see these developments as a national security threat and act speedily to deal with this threat”.

The Ghana Catholic Bishops' Conference, therefore, called on all stakeholders, especially the regulators of the country’s media space, “to clamp down on the activities of these “fraudulent spiritualists, mallams, pastors and others, who, through their audio-visual content continue to propagate evil and their 'get-rich-quick' activities on our television stations and social media platforms”.

“It is time for us to chart a new path for ourselves as individuals, as a people and as a nation, if we intend to build s country with people who appreciate the need for hard work, honesty, values, integrity and the desire for genuine acquisition of wealth as opposed to the current situation of thirsting for quick wealth by hook or crook,” the statement further noted.

The Ghana Catholic Bishops' Conference consoled the bereaved family and prayed for the departed soul.