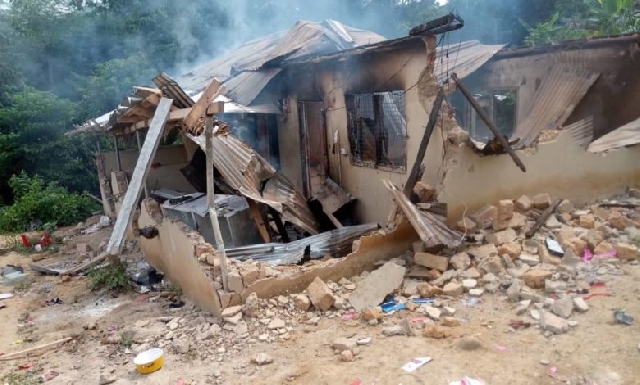 Some angry youth of Ntoraku near Adansi Fomena in the Ashanti Region have allegedly burnt down a three-bedroom house belonging to a fetish priest, Collins Asamoah, for accidentally killing a taxi driver, Kwadwo Antwi.

The incident occurred on Monday, 22 November 2021.

According to the police, the fetish priest, aged 25, is a native of Agogoso, who armed himself with a single-barrelled gun and went to confront a resident of Ntoraku for allegedly killing his mother’s goat but met his absence.

The 28-year-old taxi driver had parked his vehicle and was touting for passengers at Ntoraku.

He was sitting about 37 feet from the fetish priest who was adjusting his gun.

As he adjusted the weapon, the fetish priest exerted force, leading to the accidental discharge of ammunition which hit the taxi driver's chest.

The taxi driver was rushed to the hospital by eyewitnesses but died while on admission.

The youth of the town, who became furious, set the three-bedroom house belonging to the fetish priest on fire.

It took the intervention of the police to stop the enraged youth.

The suspect has since been in police custody.