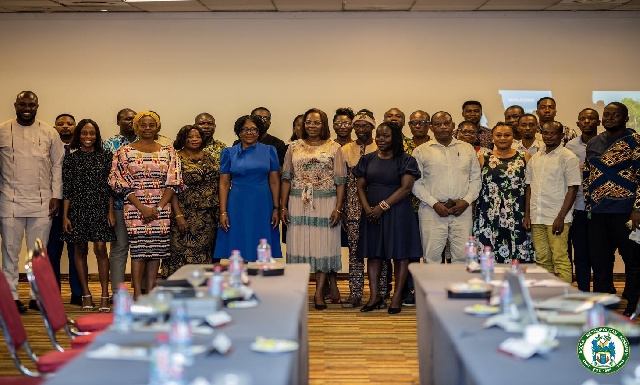 Participants at the conference

A high-level interagency roundtable dialogue on how to improve waste management with a focus on gender and social inclusion has ended in Accra with a call for interagency collaboration to drive political will on climate change.

Speaking at the meeting which was also used to launch a needs assessment report on strengthening city-informal waste sector engagement for climate resilience in Accra, Chief Executive of the AMA, Hon Elizabeth Kwatsoe Tawiah Sackey acknowledged that the leadership of the Assembly had taken cognisance of the centrality of informal waste actors to urban development in Accra adding that their contribution to waste service delivery in the city could not be overemphasised.

She pointed out that the mobility dynamics of the informal waste collectors implied that they may live in one community while plying their trade across other communities, hence the roundtable discussion to help integrate the informal waste sector workers and actors into the  Assembly's planning.

Mayor Sackey  disclosed that findings from a study commissioned by the Greater Accra Resilient and Integrated Development (GARID) Project into Solid Waste Management in low-income communities in Accra revealed that the Informal Waste Sector workers collect 51% of waste in the Greater Accra Metropolitan Area (GAMA).

The Mayor emphasised that while the sector contributed significantly to waste management in the city, the informal waste sector workers in the city were faced with precarious work arrangements, job insecurity, limited access to social protection and they often operate within infrastructural limitations hence the need to ensure that their activities comply with existing city and national regulations.

"Recognising and supporting informal waste sector work and workers is essential to improving collection, transport and recycling of solid waste. We know that these efforts, when prioritised and delivered effectively, also have the potential to create (green) jobs, improve livelihoods, and promote good health, especially in low-income neighbourhoods," she said.

She expressed the City's commitment to advancing the inclusion of informal waste actors in its solid waste management targets adding that the goal of the city's resilience strategy and Climate Action Plan, was to improve the quality of life for citizens working in the informal sector and living in informal settlements as well as create jobs through the collection, sale, and local manufacturing of recyclable materials.

She noted that based on a needs assessment report on strengthening city-informal waste sector collaboration for climate resilience development by C40,  the city and the informal sector had resolved to improve interagency collaboration, the need for livelihood development opportunities, inclusive engagement and planning as well as policy development and capacity building.

"Now is the time to work together to bring those aspirations and goals to life...The Accra Metropolitan Assembly is keen on working with all relevant local and national agencies and stakeholders to create a clean, safe Accra for all. We invite all decision-makers here to join us in these efforts to make the city cleaner and improve our sanitation through the active engagement and inclusion of informal waste actors," she added.

She also expressed commitment to working with partners such as C40 Cities in creating and promoting a lasting partnership with informal waste sector actors, ensuring proper integration and alignment with local and national regulations and policies.

City Advisor for inclusive climate action in Accra, Ms Josephine Agbeko in a remark said the AMA was  1 of 9 cities participating in C40’s Global Green New Deal (GGND) Pilot implementation initiative led by C40’s Inclusive Climate Action (ICA) Programme aimed at providing cities with a roadmap and support to plan, build consensus and deliver bold climate action which would be beneficial to all.

She said recognising and supporting informal waste work and workers were essential to improving the collection, transport, and recycling of solid waste adding that these efforts, when prioritised and delivered effectively, had the potential to create green jobs, improve livelihoods, and promote good health, especially in low-income neighbourhoods.

She stressed the need for interagency collaboration to drive political will on climate change measures and create equitable economies and cities as well as the inclusion and integration of informal waste sector workers into the city's water chain to enhance the waste collection.

The National Chairperson of Borla Taxi and Tricycle Operators Association, Mrs Lydia Bamfo expressed appreciation to the AMA and C40 cities and appealed for support to enhance their occupation to help in realizing the vision of making Accra the cleanest city in Africa.

Present at the dialogue were representatives from the informal waste sector and other decision-makers in sanitation such as Green Africa Youth Organisation(GAYO), Ministry of Energy, Science and Technology Innovation(MESTI),  Ministry of Sanitation and the Greater Accra Regional Coordinating Council( GARCC) among others.