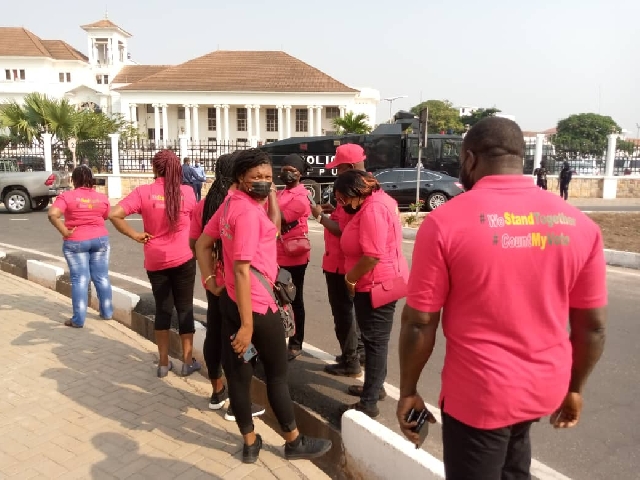 The group standing outside the premises of the court

A group of supporters of the opposition National Democratic Congress (NDC), calling itself “We Demand For Justice”, on Tuesday, 19 January, 2020 massed up at the forecourt of the Supreme Court.

The group was there ahead of the hearing of the 2020 election petition filed by former President John Dramani Mahama.

Members of the group were clad in red without any placards.

Speaking to Class News’ Blessed Sogah, Convener for the group, Daniel Frimpong noted that their presence outside the court is to drive home a message that their votes must count.

According to the group, although they believe in the courts to deliver justice, their presence at the court was to create awareness that their votes must count.

“If we have a belief that does not mean that you should sit at home, as time goes on, the members will keep increasing. We’re coming to support the court process and as we are, to create awareness that we want our vote to count. We’re not heckling the court, we’re not inside, we’re outside the court premises,” Convener for the group stated.

The group, however, disclosed that the Ghana Police was not given prior notice of their presence at the court today but stressed that they were law-abiding citizens.

“We’re law-abiding people, and we’re peaceful, as we stand here, nobody is even carrying a stick or a placard. This is a group of people standing somewhere, we’re not even moving around we’re just standing. We’re law-abiding citizens, we’re here for peace, we’re not here for any violence, the only thing is we want our votes to count.”

The Supreme Court is expected to conduct a pre-trial conference for both parties involved in the election petition case.

This will set the tone for the trial.