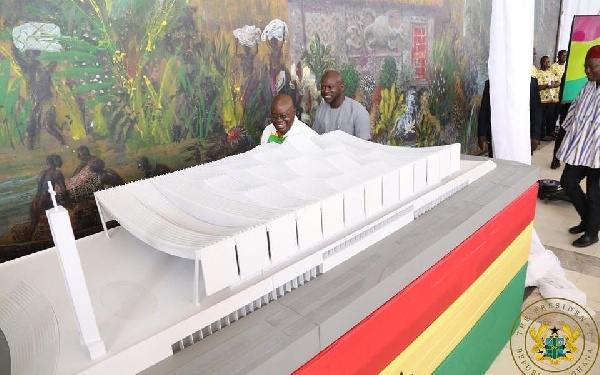 Work on the National Cathedral is progressing speedily, Finance Minister Ken Ofori-Atta has told parliament in the mid-year budget review on Thursday, 29 July 2021, noting that ordinary Ghanaians who wish to contribute to the construction of the edifice, would soon be given the opportunity to do so through a yet-to-be-launched 100-Cedis-a-Month Club.

He said following the programme of the contractors— and with God helping us— the National Cathedral is expected to be officially inaugurated on 6th March 2024, exactly seven years to the day, 6th March 2017, when the President cut the sod for the commencement of work.

Mr Ofori-Atta said “upon completion, and as the president has promised, the National Cathedral would add a critical infrastructure to our nation building architecture by providing us with a sacred space for the formal religious activities of state, including state funerals, and a national crypt for the entombment of key national leaders”.

The Museum, dubbed the Bible Museum of Africa (BMOA), will examine the role of Africans in the Bible, and the role of the Bible in Africa and the African Diaspora.

“The first of its kind in Africa, it would also examine the history, role and impact of the church in our national life”, he told the house.

The Biblical Garden would include the major trees and shrubs of the holy land, and would serve as a key resource, including theological education, for the church in Ghana and the African continent.

Overall, Mr Ofori-Atta added, “the integration of the Bible Museum and Biblical Garden is expected to transform the National Cathedral into a major religious tour de force, and a game changer in the nation’s tourism industry”.

“Mr. Speaker, the State-Church partnership envisaged by the president to develop the National Cathedral is also progressing steadily”, he noted.

The aim of the club is to mobilise one million Ghanaians who will give GHS100 a month toward the construction of the National Cathedral.

A special short code — *979# — has been developed for this purpose.

“We look forward to Mr. Speaker and members of this august House joining the 100-Cedis-a-Month Club, and, thus, adding their names to the historic coalition that would build the National Cathedral to the glory of God, and the edification of our nation and its people”.