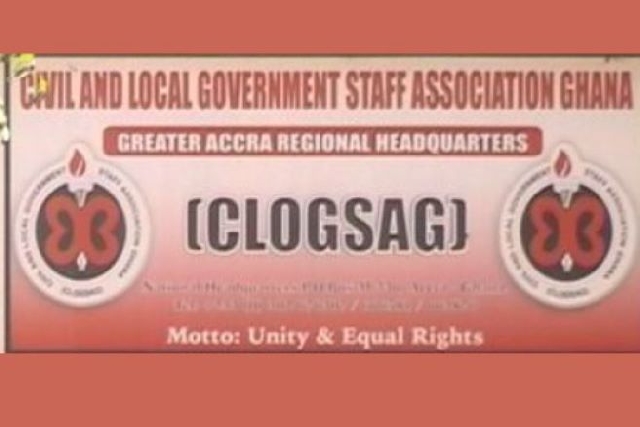 The Civil and Local Government Staff Association Ghana (CLOGSAG), has called on the government to halt the political appointment of chief directors into the civil and local government services.

Speaking at the 5th Nathan Quao Lecture in Accra, today, Thursday, 29 September 2022, on the theme: “Abuse of Political Power in Ghana Civil Service; The Bane of National Development” Executive Secretary of CLOGSAG, Isaac Bampoe was upset about how politicians have undermined operations in the civil and local government services.

He cited the recruitment of party apparatchiks and personal assistants who lack institutional memory into various ministries.

He said although civil servants and politicians have worked together over the years, political interference has intensified in the Fourth Republic due to the Winner-Takes-All nature of the 1992 constitution.

He further identified "creation of 'jobs for the boys', campaign resources and loyalty, moneycracy associated with political campaigning, patronage and clientelism and involvement of bureaucrats in politics" as some reasons for such interferances.

He noted that politicisation has indirectly affected the mandate of most civil service organisations, stifled development, affected civil service reforms and has “injured” Ghana’s fledgling democracy.

Touching on the way forward, Mr Bampoe suggested that politicians must desist and resist the temptation of creating avenues of employment for their teeming supporters to avoid unnecessary duplications of efforts and wanton dissipation of scarce government resources.

He further suggested that the service be insulated from direct political interference and machinations.

Read below details of the lecture:

Abuse of Political Power in the Ghana Civil Service: The bane of National Development

The Civil Service shall until provision is otherwise made by parliament, comprise service in both Central and Local Government.  As contained in the 1992 Constitution Article 190(2).

From independence, this country has witnessed administrators working at the top echelon of Government serving different Political regimes without losing their positions. This publication is in honor of Nathan Annan Quao, a celebrated Civil Servant, described by independent observers as part of a “diminishing survivors of an era, which many consider to have been a high-noon of quality and dedication to the Civil Service.” He worked for five (5) successive governments (from Kwame Nkrumah to the Jerry John Rawling’s regime) without any tinge of politicization. He exhibited some key values and principles of the Civil Service such as Leadership, Integrity, Loyalty, Selflessness and Neutrality which ensures efficiency and effectiveness in Civil Service delivery.

Ghana has been touted as a beacon of democracy, good governance, and a story of hope for Africa and other developing nations in the world. This is largely due to the successes it has chalked in consolidating its democracy, through successful and successive elections since 1992 to date. Ghana appears however not to have a strong, effective, and efficient Civil Service.

The Civil Service is pivotal in National Development as it serves as the wheel of Government machinery.

National Development connotes “The Capacity of a Country to raise the standard of living of its residents.  It can be achieved by providing individuals with basic livelihood requirements and supplying them with employment among others.  Development is a process that creates growth, bring in progress and positive change.”

Thus any impairment in the activities of the Civil Service would affect National development.  It is within this context that Civil and Local Government Staff Association, Ghana (CLOGSAG) has chosen the theme:

“Abuse of Political Power in the Civil Service: The Bane of National Development”.

Whereas there is no single factor that has compromised the quality and effectiveness of the Civil Service, one cannot disregard Politicisation as one of the contributory factors.

It has been found out that the practice of political interference has intensified in the fourth Republic due to the following key factors among others:-

·       Involvement of bureaucrats in politics.

Moreover, it has been observed that Politicisation has indirectly affected the mandate of most Civil Service organizations, stifled development, affected civil service reforms and has “injured” Ghana’s fledgling democracy. Although strengthening of our existing laws will help curb this phenomenon, it is recommended among others that, a review of the President’s power of appointment would help minimize Politicisation in Ghana’s bureaucratic set-up.

The difficulties the Services face today is how to navigate the thin line that exists between being professional and implementing the programmes of the various political regimes to enhance the welfare of the polity without necessarily eliciting political tags. In our quest to be professional in our work and stick to the principles underpinning the service, we end up courting disaffection from the political divide.

Compliance with the policies of a particular government or politician also creates a delicate situation for most Civil Servants, particularly the senior ones as such work ethic is misconstrued as allegiance to a particular political divide. Ironically the civil servant is expected to show unfettered allegiance to the government of the day. The existing bureaucracy within the Civil Service structure is also perceived as deliberate delay tactics and frowned upon by politicians

Politicians have not helped matters in our governance process in adhering and complying with the tenet of the Civil Service principles, Instances of intrusion of the politicians in Civil Service activities are as follows:

a.    Tinkering with institutional arrangements in the Civil and Local Government Services without recourse to their respective Governing Councils;

b.   Creation of parallel Institutions staffed with party apparatchiks to rival the Services in the implementation of government policies and programmes;

c.    Recruiting of party apparatchiks as consultants to perform routine Civil Service functions and paying them higher unearned salaries, thus ballooning the Civil Service wage bill as reported in the 2020 Auditor-General’s report for MDAs and MMDAs. Hindsight evidence reveals that the so called “ghost names” that cannot be identified in the Civil Service payroll have turned out to be Personal Assistants of Ministers;

Related to the above, permanent consultancies for key functions of the Services, have been outsourced to party apparatchik consultants. This has compromised the quality of services provided by most Civil Service organizations, as they are undertaken without the required institutional guidance, expertise and experience.

d.   Foreign Training and development workshops meant to build the capacity of Civil Servants are also hijacked by politicians and their party apparatchiks to the detriment of the growth of the Services. The ones they are unable to hijack are sabotaged to the disadvantage of the nation;

e.    Political appointments of Chief Directors and Heads of Departments to the Civil and Local Government Services contravenes the Supreme Court ruling (writ no. J1/16/2016, 14th June, 2017). This situation is a clear example of abuse of political power;

f.     A key function taken over by the political appointees is furthermore in the area of Policy Initiation and Formulation. Instances of this can be cited in almost all the Ministries leading to weak Policy Coordination and Management;

g.   The creation of parallel institutions to cater for the parochial interests of Politicians has also to a large extent duplicated the efforts and services offered by staff of the Civil and Local Government Services;

h.   The management of school feeding program for instance, is currently in the hands of a school feeding secretariat at the center of government instead of it being managed by the Local Government Assemblies;

i.      Special Assistants brought in by politicians have convoluted the required Policies with the introduction/infusion of all sorts of policy advice which is not fit for purpose for our circumstances. Instances have also been cited of special assistants’ advice holding sway over that of the experienced Civil Servant;

j.      Special Assistants go to the extent of undertaking their own narrow researches to inure to their benefits to the detriment of planned Governmental researches by Ministries thus limiting the efficacy of Policy Formulation and effective implementation of Government Policies;

k.   The periodic review of Government Policies and Plans which should naturally follow a certain pattern are truncated as a result of superimposition of utopian ideas by Political cohorts;

l.      Central government projects have over the years suffered neglect as a result of inadequate provision of resources. Resources meant for service provision in the various MDAs and MMDAs are channeled into creating projects for Political cohorts, this has led to limited funding for Civil Service activities and functions as a result of Irregular release of funds. It has contributed to a lot of redundancy in the work activities of Civil Servants especially in the area of monitoring, coordinating and evaluating of government policies and plans thereby giving the Civil Servant a “bad name”.

m.    Succession plans for the services are truncated by political appointments and institutional arrangements which do not go in tandem with the dictates of regulatory frameworks. Ultimately, these interferences lead to loss of Institutional memory which is very important for the development and progress of the Services and Policy Management.

n.   Political interference has also led to the incident of “goro boys”. Where cohorts of Politicians interfere with services of established Government Institutions and play roles of “betweeners”/middle men to provide services for the public disregarding the laid down processes.

We are where we are because we have neglected the development of the Civil and Local government Services for political expediencies, and no government can achieve its objectives without a well-motivated, properly structured and well-resourced administrative machinery. The way to go with any fledging democracy is to relook at the critical role of the Services to ensure National Development and also take appropriate steps to ensure the following:

·       Insulate the Services from direct political interference and machinations;

·       Appointments, promotions and career management should remain neutral and be based solely on merits. (based on experience instead of emphasizing on qualification);

·       Conditions of service must be enhanced and maintained at the level that would exact the requisite performance standards;

·       Review the laws/Civil and Local Government Services Acts (composition of the Councils);

·       Politicians must desist and resist the temptation of creating avenues of employment for their teeming supporters to avoid unnecessary duplications of efforts and wanton dissipation of scarce government resources.

It is expected that with the coming into force of the 1992 constitution, thirty (30) years now, the Public Services Commission (PSC) would have safe guarded the Civil Service from Political influences and abuse through the implementation of Article 197 which provides that the PSC “may, subject to the approval of the President, make regulations, by constitutional instrument, for the effective and efficient performance of its functions under this Constitution or any other law”. This provision has however not been effected.

Hinged on the above, the PSC should come out to regulate the various policy requirements of the Services as provided by the constitution in Article 197. This will to a very large extent insulate the Civil Service from political abuse.