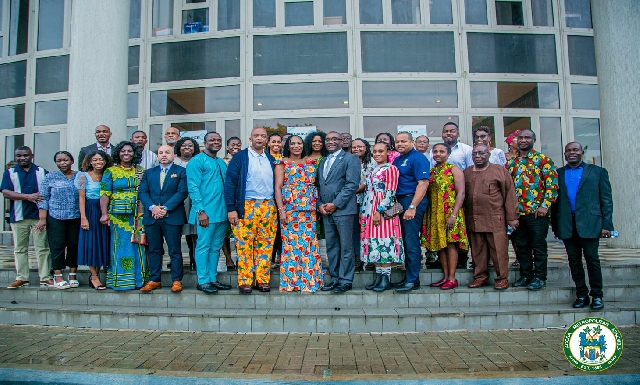 US delegation at AMA office

A 30-member business delegation from Miami-Dade County, Florida in the United States of America, led by three commissioners has called on the Mayor of Accra, Elizabeth K.T Sackey to explore investment opportunities in Accra.

The courtesy call which was facilitated by Ambassador Nancy Sam formed part of efforts to strengthen bilateral relations, promote cultural exchange as well as explore economic opportunities between Accra and Miami Dade County to enhance development.

The delegation is in Ghana for a three-day visit to seek investment in Aviation, Sea ports, Tourism, and Commerce, among other interesting opportunities.

The Mayor of Accra, who welcomed the delegation said there were multiple investment opportunities available in Accra for direct private investment as well as Public-Private Partnerships (PPP), among others.

She also touched on the need to establish a sister-city relationship between Accra and Miami to create opportunities and facilitate socio-cultural and economic development between the two cities.

She used the opportunity to invite people living in the diaspora to come and partake in the unique Homowo festival; “as it forms part of who we are as Gas from the Greater Accra Region" she said.

For his part, Jean Monestime, Miami-Dade County Board of County Commissioners, District 2, who led the delegation said the team was in Accra to learn for the first time about the culture, share ideas, and exchange investment opportunities.

"We came to promote our city as a destination, we came to tell the Ghanaian people if they wish vacation anywhere in the world they should choose Miami...More than 52 percent of our two million people speak a language at home other than English hence the diversity of the county... As government officials we normally organise these trade missions and bring with us business people who will establish linkages with other businesses overseas to build relationships and fuel each other with the opportunities they would repr4sent for each other, " he said.

He said the people of Miami- Dade County traced their roots to Africa hence the need to reconnect with their ancestral routes.

“We are here to foster stronger relationships with Accra and we believe Accra and Miami stand to benefit in the area of airports and seaports, economic partnership, tourism, and many other opportunities, we have interest in so many,” he added.

Present at the meeting were some members of the Accra Metropolitan Assembly (AMA) management notably a Deputy Director and Head of Administration, Madam Dorinda Owusu Acheampong, the Metro Finance Director, Francis Anaba, Head of Planning and Coordinating Unit, Richard Oduro and the Director of Waste Management Department, Engr. Solomon Noi-Adzeman Nuetey among others.