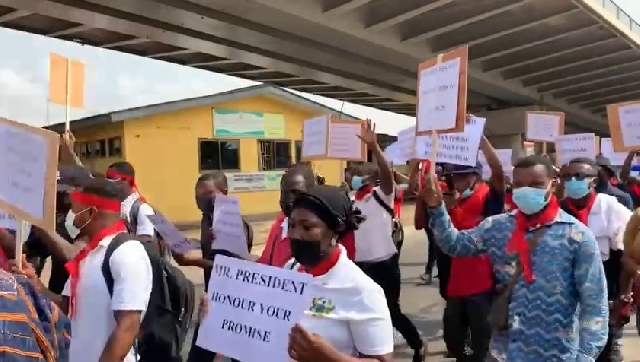 The Nation Builders Corps Trainees Association of Ghana (NABTAG) has suspended the phase two of its planned picketing over the 10-month unpaid allowances.

The group had scheduled its next planned picketing for Tuesday, 20 September 2022, at the Jubilee House.

A statement issued by NABTAG, signed by its National President, Dennis Opoku Katakyie, said: “The leadership of NABTAG was invited by the Greater Accra Regional Police Command, for deliberations on the notification letter,” regarding the planned picketing.

It continued that: “Per the meeting held on Sunday, 18th September, the Greater Accra Regional Police Command raised a disapproving position about the targeted destination point for the picketing, which is the frontal area of the Jubilee House, seat of government.

“We were asked to change the location owing to the fact that it’s a security zone and for that matter for some reasons, so such exercise cannot be held there.”

According to the leadership of NABCO Trainees, despite suggestions by the Police to use the Independence Square, it has no yet agreed, as the first picketing held at the proposed venue did not yield any positive outcome.

It indicated that the leadership of NABCO is deliberating on the next approach, and will communicate to its members soon.

“Due to this unfortunate development, the scheduled date of 20th September, will not be convenient for us to carry on with the picketing.

“A new plan will be communicated after following up with the police on our revised initial plans,” the statement further noted.

It added: “Our posture as law abiding citizens doesn't mean we are cowards to be taken for granted by authorities as peace without justice isn't peace enough.”