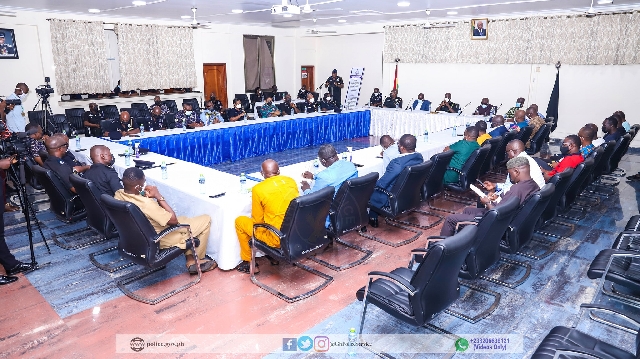 IGP meeting executives of the GFA

The Inspector-General of Police (IGP), Dr George Akuffo Dampare, has said his office is determined to ensure the safety of players, match officials, spectators and other patrons at football games across the country.

The IGP gave the assurance at a meeting held with the GFA in Accra on Friday, 5 November 2020, as part of the Ghana Police Proactive Preventive Policing Strategy.

The meeting, which was aimed at identifying peculiar challenges associated with sports security in the country, was attended by the Executive members of the Ghana Football Association (GFA) and officials of all the 18 Premier League clubs.

Concerns raised by the President of the GFA, Mr Kurt Edwin Simon Okraku, included the inadequate number of police personnel deployed for stadium duties; hooliganism, lack of prosecution of sports-related crimes, narcotic use by spectators during matches, the management of stadium gates and lack of CCTV cameras in the stadia.

Issues regarding match-fixing as well as the need for a dedicated police unit for sporting activities, irregularities in sports betting and how it affects the integrity of games were also discussed.

Reacting to the concerns raised by the GFA President, the IGP noted that his outfit was determined to protect all patrons involved during football matches.

He also pointed out the establishment of a Joint Implementation Taskforce comprising the GFA and the clubs to work toward resolving the concerns.