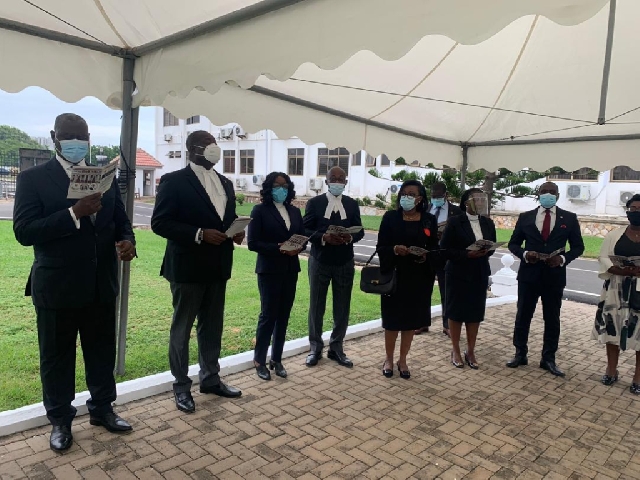 The Ghana Bar Association (GBA) has described comments suggesting bribery allegations against a Supreme Court Judge by the Member of Parliament (MP) for Asawase, Mohammed-Mubarak Muntaka during the election of a speaker of Parliament as “totally unacceptable” and called on the latter to “substantiate the allegation or retract same and apologise to the Justices of the Supreme Court in particular.”

This was contained in a statement issued by the GBA and co-signed by its National President Anthony Forson Jnr, and its National Secretary, Yaw Acheampong Boafo.

The GBA condemned “unreservedly the mayhem that occurred in Parliament during the election of the Speaker of Parliament” and indicated that it “finds it worrying that some elected representatives of Ghanaians would engage in such acts of misconduct and bring the Parliament of Ghana into disrepute.”

According to the GBA, “the actions of the Members of Parliament are a blight on the democratic credentials of Ghana, which is a shining example on the African continent.”

The statement continued that: “It is the expectation of the GBA that there will be no such chaotic and disorderly scenes in Parliament in future, and that the Parliamentarians will always strive to safeguard Ghana’s democratic credentials.”

The GBA noted that it has “read and viewed with great concern, accusations made in the media in recent times with respect to the judiciary. The Bar finds the allegations offensive and distasteful. They incite hatred among the public with regard to the Judges, expose them to ridicule and put them into disrepute. Such allegations with respect to the Judiciary undermine the integrity of and erode public confidence in the justice delivery process, and may result in lawlessness.”

Referring to the Member of Parliament (MP) for Asawase, Mohammed-Mubarak Muntaka’s allegations that a Supreme Court Judge tried bribing an MP during the election of a speaker of Parliament for the 8th Parliament, the GBA said it “finds the comments totally unacceptable.”

It, therefore, called on the MP to “substantiate the allegation or retract same and apologise to the Justices of the Supreme Court in particular, and the Judiciary in general.”

It further urged Ghanaians to “be circumspect with respect to statements made regarding public officers and persons occupying positions of trust.”

The GBA added that: “They may be criticised but the critisms should be constructive and not disparaging and demeaning. Public servants must also act in a manner to inspire confidence in the general policy.”