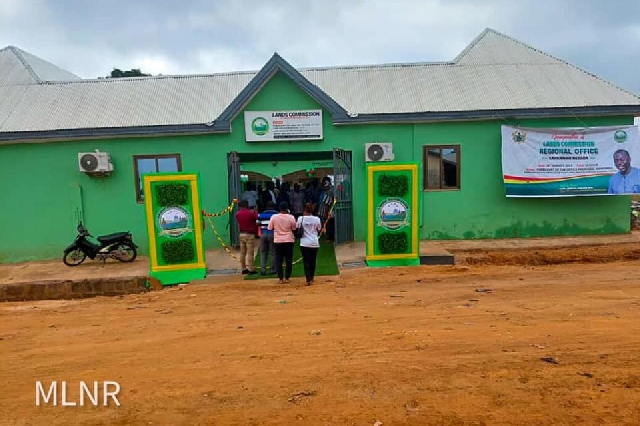 In line with Article 258 and 260(1) of the 1992 constitution which mandates the creation of the Lands Commission's regional offices across the country, the Lands Commission has extended its footprint to the newly created regions with the inauguration of well-furnished and digitalised offices in the Western North, Oti, Ahafo, Bono East, North East and the Savannah Regions respectively.

On behalf of Mr Benito Owusu-Bio (MP), the Deputy Minister for Lands and Natural Resources in charge of Lands and Forestry, who has been working closely with the Lands Commission on these inaugurations, the National Chairman of the Lands Commission, Mr. Alex Quaynor commissioned the last of the six offices in the Savannah Region at a colourful ceremony on Wednesday, 10th August, 2022.

Speaking at the inaugural ceremony, Surveyor Quaynor stressed the significance of Lands Commission in serving government and the general public, particularly in managing public lands and other lands vested in the President as prescribed by the constitution.

He said "land is a strategic asset which forms the basis of every development activity and hence the need for formal land administration to promote development at all levels."

The National Chairman also stated that the creation of the Lands Commission office in the region will help advise the government, local authorities and traditional authorities on the policy framework for the development of the region and the entire country.

He further noted that these offices are fully furnished with modern computerized systems that is geared towards the government’s digitalization agenda.

"Mr. Chairman, what is unique about the establishment of these offices in the new regions is that, the offices shall operate in a fully digital environment. This will help achieve speed and reduce the usual delays associated with processing of documents in manual environment," he emphasized.

The Savannah Regional Minister, Saeed Muhazu Jibril, in a remark thanked the President of the Republic for the creation of six new regions and for the provisions that have been made so far to enable the region thrive.

Hon. Muhazu Jibril lamented how the region have had to struggle dealing with their land issues when they lacked an office, recounting the miles they have had to cross all to ensure that they do the right thing in registering their Lands.

He said due to the seriousness of lands issues to the people of the Savannah region, the Regional coordinating councils in collaboration with the Chiefs, particularly the Yagbonwura have acquired a three-acre land for the commission, in readiness for their office edifice and staff accommodation.

He urged the natives of his land who work with the newly commissioned office not to grow weary in the face of any current challenges they may be facing as he said " every new beginning is difficult but someone has to sacrifice for others.”

He also assured the Commission of the full backing and support of his office to make the work of the Lands Commission in the region a successful one.

The Deputy Executive Secretary of the Lands Commission in charge of operations, Mr. Benjamin Arthur in a remark indicated that the newly commissioned office has the advantage of operating in a digital space and therefore urged that they embrace the opportunity and do a better job than those who had to start from in manual environment.

The Chairman at the event Chief Mumuni Joseph Akati, expressed his joy for the commissioning of the regional office saying that the people of Damango have been yearning to witness such an important feet in the life of the region.

He cautioned that indigenes who would want to transact business with the Lands Commission office should visit the office in person to avoid mistakes and time wastage.

The team also took the opportunity to pay a courtesy call on the King of the Gonja Land, Yagbonwura to thank him for his support and provision of the land for the construction of their office space.