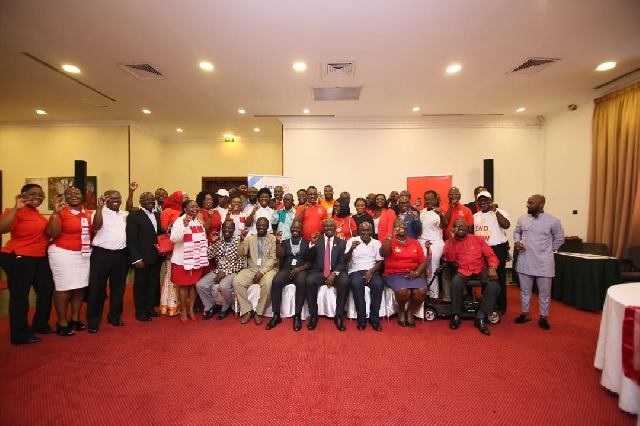 The Special Advisor to President Nana Akufo-Addo on the Sustainable Development Goals (SDGs), Dr Eugene Owusu, has praised Rotarians in Ghana and around the world for their fight against polio.

Delivering a keynote address at a breakfast meeting organised by the Rotary Club of Accra – Airport, Dr Owusu lauded the vision inspired by Rotary International and its partners in the Global Polio Eradication Initiative and the quest to defeat the disease as enshrined in the 1988 World Health Organisation Resolution.

The breakfast meeting was in commemoration of World Polio Day 2019.

The Day is marked each year on October 24 to commemorate Jonas Salk, who invented the Inactivated Polio Vaccine.

According to Dr Owusu, the Rotary Club has contributed to polio cases dropping by 99.9 per cent. That, he said, has saved some 18 million children from life-shattering paralysis from this terrible disease.

"This equates to a whopping average of over 580,000 children every year saved from the direct and horrendous impact of polio," he noted.

Dr Owusu added that: "The power of big vision backed by smart actions and delivery in implementation has, indeed, become the hallmark of Rotary Clubs everywhere."

He noted that since 1979, Rotary International has contributed almost $2 billion and countless volunteers to the fight against polio."

Dr Owusu, who was speaking on theme: "Arise for Polio", explained that the “progress the world has seen in the past decades in addressing polio has been achieved as a partnership with many organisations – notably governments and the United Nations agencies but I will stick my neck out and state that the phenomenal progress achieved is and will always be an enduring and a singular legacy of Rotary’s leadership and its efforts."

He noted that while there is no cure for the disease, in today’s world, polio is avoidable because there is a safe and effective vaccine against it.

Dr Owusu said extreme poverty, regressive customary norms and beliefs, conflict and internecine warfare, misguided fears often fueled by depraved propaganda by extremists for political or religious reasons, coupled with weak health systems and, in some cases, geographical location, have made it difficult for isolated areas to be reached – a situation he bemoaned is holding back efforts to achieve a world without polio.

For his part, the President of the Rotary Club of Accra-Airport (RCAA) Kofi Adu-Mensah, revealed that one of Rotary's current fundraising events was dubbed: ‘The World's Greatest Meal' which is being used to raise funds for the "End Polio Account" project.

He added that there are 675 events registered in 51 countries with more than 23, 700 participants worldwide. He, however, called for more support to "end polio now".