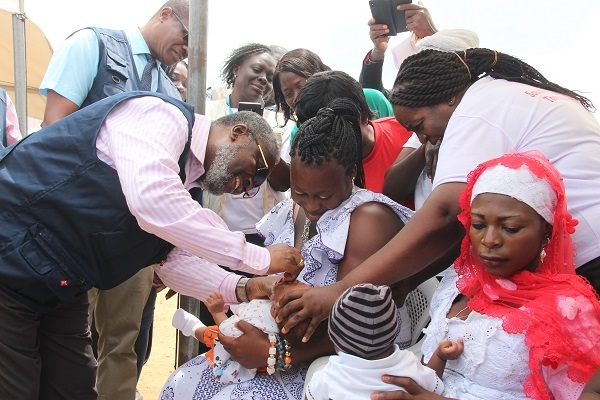 The Ghana Health Service (GHS) has announced that it will start the first phase of its Polio Vaccination exercise in the Upper East Region from Wednesday, 25 September 2019.

This was disclosed by the Upper East Regional Director of the GHS, Dr Winfred Ofosu at a press conference in Bolgatanga.

The vaccination exercise is targeted at children aged 0 to 5 years.

Dr Ofosu told journalists that: “Every child within this age range will be provided with the vaccination to ensure full protection from this debilitating disease.”

He also indicated that community health volunteers and health personnel would visit households, schools and market centres among other places to vaccinate children against polio.

He also advised parents and caregivers whose children are not visited for the vaccination to visit the nearest health centre to receive the vaccine.

“Every child will be given two drops of the polio vaccine and I entreat all caregivers who are not visited by the health volunteers to go to the nearest health facility to receive the vaccination.”

Explaining the rationale behind the exercise, Dr Ofori said in early July 2019, “a Circulating Vaccine-Derived Poliovirus Type 2 (cVDPV2) was confirmed in an environmental sample collected in June 2019 from the Tamale metropolis, northern Ghana. An additional cVDPV2 positive environmental sample was collected from Accra District, Greater Accra Region on 13 August 2019.”

According to the Director, those positive environmental samples and the case of cVDPV2 appeared to be linked to the strain of vaccine derived from the poliovirus that emerged in Jigwa State in Nigeria, which subsequently spread to other parts of Nigeria.

“The virus is transmitted from person to person through the faecal-oral route from contaminated water or food and multiplies in the intestines from where it can invade the nervous system and cause paralysis. The weakness, most often, involves the limbs but may less commonly involve the muscles of the head, neck and diaphragm.”

Dr Ofosu noted that the exercise was not different from previous mass vaccination exercises conducted in the country over the years, and assured the public that the vaccine is safe, and had over the years reduced the number of diseases and deaths in the region.

In all, about 1,442 health volunteers have been deployed to undertake the polio vaccination exercise in the Upper East Region.