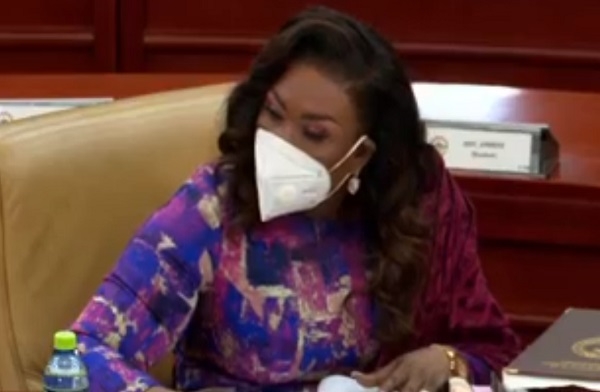 Hawa Koomson has said she is sorry for firing a weapon near a polling station during the voter registration exercise in July 2020 ahead of the general elections.

“Mr Chairman, I want to take this opportunity to also apologise to the people who were so scared on that day”, she told Parliament’s Appointments Committee on Thursday, 18 February 2021, explaining: “It was in defence of myself because I felt my life was in the danger in the circumstances that I found myself in”.

The Minister-designate of Fisheries and Aquaculture, said even though she had a bodyguard as Minister of Special Development Initiative, the policewoman was not around at the time of the incident, thus, her decision to take matters into her own hands.

She said the gun she fired was hers and is duly licensed.

The MP for Awutu Senya East Constituency (Kasoa) said she regretted the incident and wished it had never happened.

Asked if she would resort to her gun if she found herself in the same circumstances again, she said “no”.

She, however, pleaded with the Committee not to belabour the issue since it was still under investigation by the police.

“Mr Chairman, I want to plead with this Committee that the issue is with the police for investigation, so, I wouldn’t want to say much about it”.

There was confusion at the Step To Christ registration centre during the voter registration exercise on Monday, 20 July 2020, when heavily-muscled gun-wielding men stormed the premises to disrupt the exercise.

Officials of the Electoral Commission took to their heels when the men, numbering about 15, ransacked the place.

According to eyewitnesses, this led to a scuffle and pandemonium as live bullets wrung into the air.

At least, three motorbikes were burnt in the mayhem.