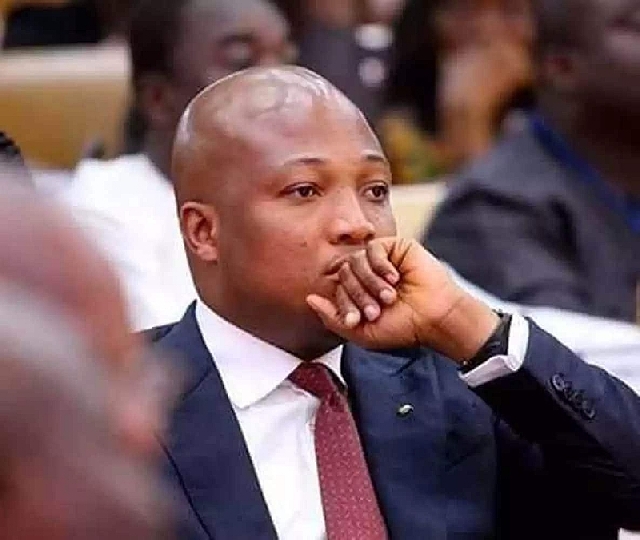 The Member of Parliament for the North Tongu constituency, Mr Samuel Okudzeto Ablakwa, has resigned from Parliament’s Appointments Committee.

According to the opposition lawmaker, his resignation, as contained in a letter dated Tuesday, 30 March 2021, addressed to the Speaker, Mr Alban Kingsford Bagbin, was “after days of careful reflection and thoughtful considerations”.

“I shall like to state that the reasons for this difficult decision is both personal and on principle,” Mr Ablakwa said in the letter.

“Respectfully, do take note that my resignation is with immediate effect and, therefore, I shall not be available for the vetting of nominees for deputy ministerial positions,” the letter indicated.

Read the full letter below: 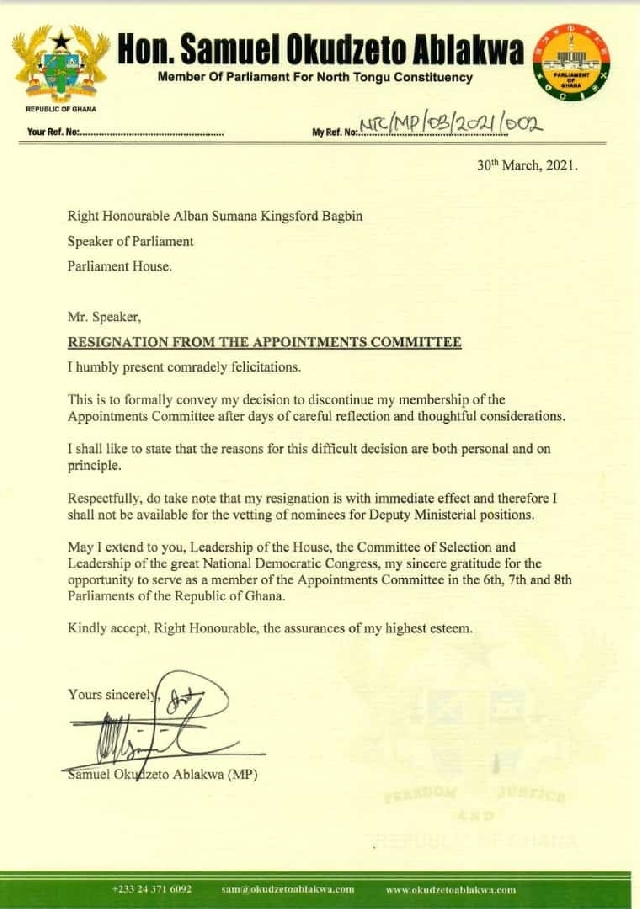 The work of the Appointments Committee has come under some scrutiny and attack from the grassroots and members of the main opposition National Democratic (NDC) following the passing of some ministerial nominees who the leadership of the party had expressly told the Minority caucus to reject.

The supporters as well as some leaders of the NDC, notably Mr Sammy Gyamti, the National Communication Officer, hurled accusations at the NDC MPs and the leadership of the Minority caucus, alleging they had sold their conscience for parochial and selfish interests.

The party’s leadership had to issue a statement urging calm ahead of Mr Ofori-Atta’s passing.

Subsequently, the NDC’s General Secretary, Mr Johnson Asiedu Nketiah, told Class91.3FM’s Kofi Oppong Asamoah on Tuesday, 30 March 2021 that it is in the interest of the party for Mr Ken Ofori-Atta to continue being the Finance Minister since his “mess” will enable the party to win the next elections.

Mr Ofori-Atta, who served as Finance Minister in President Nana Akufo-Addo’s first term, was, by consensus, approved by Parliament, after his two-day vetting, to continue in the same portfolio in the President’s second term.

Explaining why the NDC supported Mr Ofori-Atta’s approval, Mr Asiedu Nketiah, who was recently appointed to the Parliamentary Service Board, told the Class Morning Show that: “The party has taken this position because we think that the interest of the NDC will be better served if the President insists on Ofori-Atta becoming the next Finance Minister because, as far as we are concerned, he has messed up so badly that it will inure to the benefit of the NPP if they had a new face but once they have chosen to maintain him, he should be there, continue the mess, which will then pave the way for the NDC to come to power”.

Asked if the NDC then supports the approval of Mr Ofori-Atta to continue serving as Finance Minister, Mr Asiedu Nketiah responded: “Yes” but added: “If we were in power, Ofori-Atta will never get near the Finance Ministry but the situation is that they are in power and the party in power defines the national interest according to their beliefs, so, if the mess he is creating constitutes national interest, in the view of the NPP, let him go and continue because we consider it to be a mess and we now have reason to believe that Ofori-Atta has lost face in the national finance community, he has lost face domestically; the workers of the country have a problem with him and all that”.

In his view, Mr Ofori-Atta must be allowed to continue to face the consequences of the “mess” he created.

“I’ve heard of policemen whose salaries were topped up during the elections and after the elections, deductions were made”.

“So, the person who was responsible will still continue to be there and they will be asking him those difficult questions”.

“So, we think that it is in our history that he should continue”, Mr Asiedu Nketiah stressed.

Ahead of his approval, the party, per a statement signed by Mr Nketiah, urged calm among its grassroots supporters, since whatever position the Minority Caucus takes with regard to Mr Ofori-Atta’s nomination, has been discussed and agreed with the leadership of the NDC.

The purpose of the letter, Mr Asiedu Nketiah explained, “is to indicate to our party’s rank and file that we have held several engagements with the leadership of parliament and we have charted a consensual position as to how they should handle the nomination of Ken Ofori-Atta and, so, they should not be surprised if there’s that decision coming from parliament and we did this because of what happened after the approval of some nominees early on because there was no such communication between the party and the grassroots”.

“There was pandemonium, sort of: everybody was angry, accusing people left, right centre; we don’t want the approval or otherwise of Ken Ofori-Atta to generate any such problems within the party”, he noted.