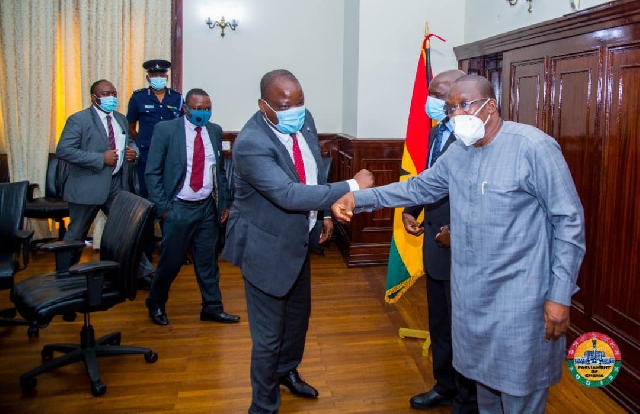 Ghana’s Speaker of Parliament, Alban S.K. Bagbin, has called for new leadership that can effectively deal with the threat of neo-colonialism on the African continent.

According to Mr Bagbin, Africa remains at the mercy of the superpowers of the world, some of whose activities pose a serious challenge to the growth and development on the continent.

Mr Bagbin made the call when a special Zimbabwean envoy led by Ambassador Albert Chimbindi paid a courtesy call on him in Parliament.

Ambassador Chimbindi and his delegation were in Parliament to officially solicit Ghana’s support for the bid of Chief Fortune Charumbira, who is seeking to lead the Pan-African Parliament (PAP) as its next President following the exit of Algeria's Bouras Djamel, whose tenure ended in March this year.

The pan-African Parliament (PAP) has scheduled a meeting from May 21 – June 4 in Midrand, South Africa, where it will among other things consider the election and review of its leadership and other structures, including Permanent Committees and regional and thematic caucuses.

Mr Bagbin commended the special envoy for choosing Ghana as the first port of call and pledged to work to deepen the diplomatic relations between Ghana and Zimbabwe.

For his part, Ambassador Cimbindi expressed gratitude to the Speaker and the Parliament of Ghana for the assurances received and commitment to work to build on new areas of cooperation.