"Branding some Ghanaians as Togolese divisive, dangerous; it'll explode in our faces one day" 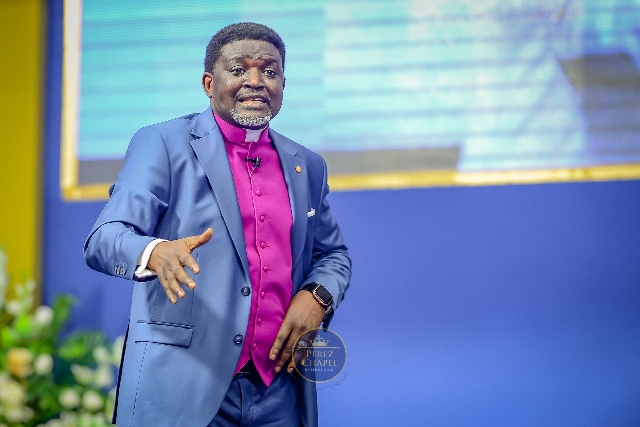 Bishop Charles Agyinasare has called our politicians, saying they must stop dividing the nation by branding a particular ethnic group as Togolese.

“Our politics must stop dividing us. Politicians must stop polarising our country”, he condemned in his Sunday, 12 July 2020 sermon.

“We used to be one country”, he observed, reminiscing: “In our boarding houses, we were bonded together: the Christian and the Muslim; the Ewe and Ashanti; the Ga and Dagbani or Frafra; the Dagaba and Nzema etc. We all stayed in one dormitory or hostel, so, we saw ourselves as one people”.

“It is not right for us to see some Ghanaians as foreigners”, he emphasised.

The founder of Perez Chapel International regretted that: “Today, our politicians see some Ghanaians as foreigners and so a 70-year-old blind man, Mr Christian Agbeviade, who had worked with the Ministry of Defence at Burma Camp for 30 years and now retired to his village, can be harassed by security forces to prove he is a Ghanaian because he is branded Togolese”.

Bishop Agyinasare said: “When I saw the video, my stomach churned as to what our country is coming to”, since, he said, “apparently, this old man was the in-law of the Moderator of the Global Evangelical Church (Right Reverend Dr Kwadzo Setorwu Ofori)”.

“You would say: ‘Bishop, is one person worth your talking?’ Yes”, he said.

He explained his concern as follows: “I left Tamale during the Konkomba-Nanumba war. It spilt over into Tamale because the Nanumbas, Dagombas and Mamprusis come from one father, so, if you touch one, you touch all”.

He recalled: “They killed two Ewes – cut their heads and put them on poles parading the cities”.

At the time, he narrated that: “Rev Steve Mensah, General Overseer of the Charismatics Evangelistic Minister was holding a revival for me and was in my house. Some irate youth holding cutlasses and cudgels came to my gate arguing whether to come in or not. My little kids began to ask me: are they going to come and kill mummy since she’s an Ewe? Upon counsel, I had to leave Tamale to Accra. So, for me, these things matter”.

“Our politics must stop dividing us and we must stop this attitude of ‘you are a foreigner’ because it does not build a nation but destroys a nation”, Bishop Agyinasare warned.

Drawing some similarities with the ethnic tensions that sparked the Rwandan genocide, the founder of Perez Chapel Internationals said: “It did not start immediately”, noting: “Tension had been building because some people were considering other people foreigners”.

“We don’t need to be piling ethnic or tribal explosive powder under our national carpet. When we do, it will explode in our faces one day”, he warned.

Justifying his calling out the development, Bishop Agyinasare said: “It could be you tomorrow”.

The Nations’ Pastor, as Bishop Agyinasare is popularly known, said the famous words spoken by German Lutheran pastor Martin Niemöller, regarding the silence of good people during the rise of the Nazis in his country, must serve as a lesson to all Ghanaians.

“As people, we must not allow our institutions to be used as tools for the persecution and unjust prosecution of fellow citizens”, Bishop Agyinasare warned.

He said “politicians have made it so difficult to criticise their wrongs”.

“When you do, they release their attack dogs who pounce on you through the media and social media and they insult you, threaten you and label you”, saying: “We cannot raise issues in this country anymore; when you do, then you are branded NDC or NPP, depending on whose ox is gored”.

Currently, Bishop Agyinasare noted, “We do not even have any known opposition radio or television station and we pride ourselves that we are a democracy. It is a shame on us”.

“The only thing necessary for the triumph of evil, is for good people to do nothing”, Bishop Agyinasare quoted to support his point.

“We need people that can tell the unpleasant truth”, he insisted, fearing: “If we build a nation of yes-people, then we are doomed”.

He observed: “We have too many sycophants who only tell leaders that: ‘You were making a mistake’ after their fall. ‘I knew things would go wrong’, they say. So, why did you not say it then?’”.

“Politicians and leaders, it is time you appreciated those who would show you your ‘sins’ but not those who would sing your praise”, he said, urging: “Leaders on all fronts need people who would not fear your office but respectfully tell you that: ‘The king is naked’ but not say: ‘Oh king, you have a nice transparent garment on’”.