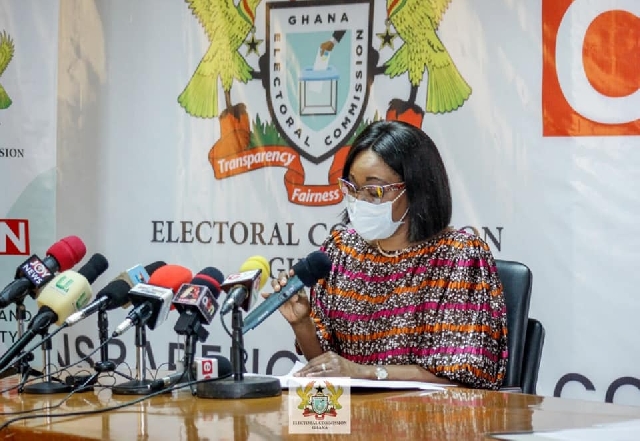 The Electoral Commission has said, so far, 11,629,410 Ghanaians have registered for the new voter ID card in the ongoing exercise as of the end of the fourth phase, the Chairperson Mrs Jean Mensa told journalists on Monday, 27 July 2020.

She said the majority of them are women.

In terms of gender, “we’re seeing more women registering in this exercise than men”, she said.

She said the women make up 52.5 per cent of the registered citizens so far, compared to men who make up 47.5 per cent.

Also, Mrs Mensa revealed that the number of first-time voters captured so far, was encouraging.

“An interesting theme that has come up is that of the first-time voters”, she noted.

She said: “For the purpose of this registration or this meeting, we classify first-time voters as persons who were exactly 18 at the time of registration”, adding: “It is encouraging to not the enthusiasm of our youth. Generally, however, those within the 18 to 20 year [category] have participated actively in this exercise”.

“However, the figures I’ll share today relate to persons who were 18 years at the time of registration. We classify this group as first-time voters because over the last two years, the Commission has held one district-level election and one referendum. Therefore, there’s the possibility that those above 18 years may have voted in those elections”, she pointed out.

She also noted that the number of persons with disabilities who have taken part in the registration process so far, is encouraging and apologised to such persons, who were not given preference when they visited some of the centres to have their names captured in the register.

“We’re happy to note that the registration process has been inclusive and has attracted a good number of persons with disabilities.

“At the end of the fourth phase, 46,237 persons with disabilities, successfully registered under the process.

“This represents 0.40 per cent of the total number registered at the end of the fourth phase”, she added.

These figures, she observed, “are very encouraging and it is an indication of the unwavering interest that citizens have in who manages the reins of leadership in our dear country”.

“We have, however, received reports that a few persons with disabilities who visited our registration centres in the field, were not always given priority as emphasised in our training programmes. Here, I’m referring, particularly to persons with hearing and speech disabilities. The Commission apologises for this breach in procedure”, she said.

“We will ensure that going forward, priority is given to people with disabilities who visit our registration centres”, she promised.