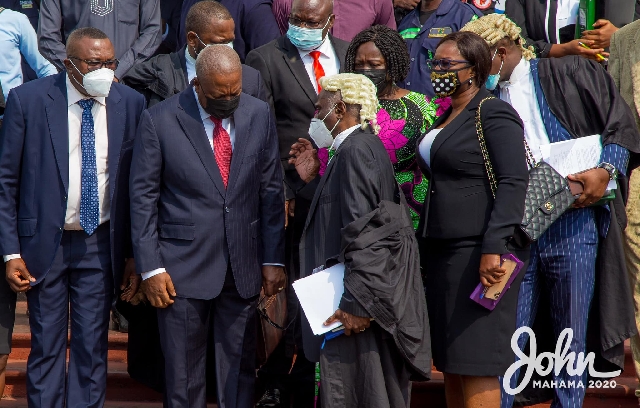 This follows an order from the Supreme Court at the hearing on Wednesday, 20 January, 2021.

Arguments on the Preliminary Legal Objections by the Respondents must also be filed by Friday, 22nd January 2021.

The Supreme Court will resume sitting on Tuesday, 26 January, 2020, to hear the substantive matter in the ongoing 2020 election petition.

The court has set out five issues for next Tuesday’s trial.

The issues include: “Whether or not the petition discloses any cause of action, whether or not the second respondent still met the Article 63(3) of the1992 Constitution threshold by the exclusion or inclusion of the Techiman South Constituency presidential election results, whether or not, based on the data contained in the declaration of the second respondent (President Nana Addo Dankwa Akufo-Addo) as President-elect, no candidate obtained more than 50 per cent of the valid votes cast, as required by Article 63 (3) of the 1992 Constitution.”

Also, “whether or not the declaration by the first respondent (Electoral Commission) on December 9, 2020 of the results of the presidential election conducted on December 7, 2020, was in violation of Article 63(3) of the 1992 Constitution and whether or not the alleged vote padding and other errors complained of by the petitioner affected the outcome of the presidential election results of 2020.”