Election petition: 'We're not doing this for nothing; we know what we're doing' – Sammy Gyamfi 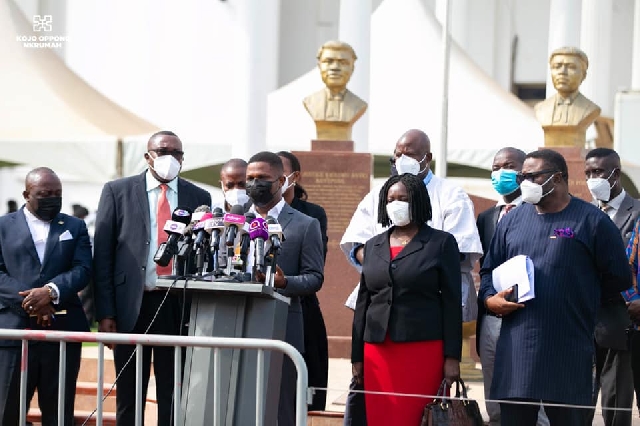 Former President John Mahama is not challenging the 2020 presidential results for nothing, the national communication officer of the main opposition National Democratic Congress (NDC) has said.

“Why are we doing all these things? We are doing all these things because of the Constitution that all of us have agreed to be bound by”, he said, adding: “Article 63(3) of that Constitution says that no person should be made a president until and unless he attains more than 50 per cent of the total valid votes in any presidential election and it is clear from Jean Mensa’s own declaration and the figures contained therein that candidate Akufo-Addo did not get more than 50 per cent”.

Per the NDC’s computations, Mr Ggyamfi said President Nana Akufo-Addo should not be in office.

He also expressed gratitude to the supporters of the party for their solidarity through the process.

“Let me appreciate those who have been encouraging us and cheering us on. We really appreciate your encouragement and we are assuring you that we are not giving up, we are not giving in, we are fighting this matter in the interest of justice and for God and country to its logical conclusion so that tomorrow, an EC Chairperson or an EC cannot arrogate to themselves the power to choose leaders who have not met the Constitutional threshold that we have all agreed to work with.

The NDC, Mr Gyamfi noted, will not give up the fight no matter how things go in court.

“And for those who are crestfallen, who are discouraged and sometimes call us, worried, disturbed: ‘Why don’t you withdraw this matter, you shouldn’t even go to court’, we want to tell them that we understand and appreciate your frustrations and we are telling you: ‘Don’t give up’. We are not doing this for nothing, we know what we are doing and we are doing this because of the love we have for Ghana, particularly that of the petitioner and, so, let us all be patient with the legal team as we go through the process”.

“We are not abusing the court processes like some are suggesting and we have not defied the orders of the court”.

Judgment is expected on the matter on 4 March 2021.