Even Akufo-Addo won’t disrespect Tsatsu like Oppong Nkrumah, Nana B do – Gyamfi 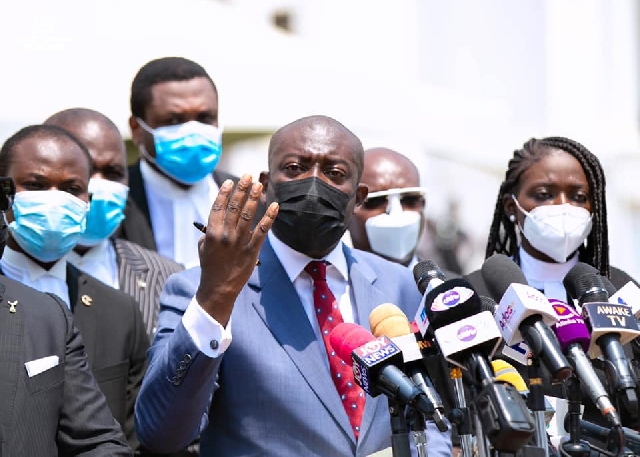 The legal team of former President John Mahama has described as “disrespectful”, some of the post-trial commentary of fellow lawyers Kojo Oppong Nkrumah and Henry Nana Boakye (Nana B) of President Nana Akufo-Addo’s side, against Mr Tsatsu Tsikata, the lead counsel for the petitioner in the ongoing election petition at the Supreme Court.

“The disrespect from the spokespersons of the 2nd Respondent toward the lawyer for the petitioner in the course of these proceedings for us is very unacceptable”, Mr Sammy Gyamfi told journalists on Thursday, 18 February 2021 after the court adjourned sitting.

“You hear them stand here and describe things that counsel for the petitioner has said as English and grammar: ‘Lawyer Tsatsu Tsikata was just speaking English and not law’,” he said.

“You do not do that, we are not trained to say things like that about our seniors at the bar. All these people are juniors by far to the people they are trying to ridicule. When we [NDC] come and stand here, we do not ridicule the likes of senior Akoto Ampaw and Justine Amenuvor; we all see how they struggle on their feet, yet we do not come here to ridicule or mock anybody”, noted.

“I mean why do you come and stand here and talk down on somebody that you may never be able to even come close to what they have attained or achieved in life. I am not sure that even President Akufo-Addo will disrespect lawyer Tsatu Tsikata.”

The statement, signed by Communication Director Kakra Essamuah took issue with what it describes as the constant attacks unleashed on the lawyers of the former President by the legal spokespersons of the second respondent, President Nana Akufo-Addo.

The NDC singled out Mr Oppong Nkrumah and his fellow lawyer, Mr Henry Boakye, as the main culprits.

Read the NDC’s full statement below:

NDC STATEMENT ON ATTEMPTS BY KOJO OPPONG NKRUMAH AND HENRY NANA BOAKYE TO INCITE THE SUPREME COURT AGAINST NDC LAWYERS.

In the course of the hearing of the presidential election petition initiated by HE John Dramani Mahama in the Supreme Court, both the NDC and the NPP have sets of lawyers who meet the media immediately after each sitting to publicise their view of what has taken place in court.

It is a process from which the good people of Ghana have come to appreciate the respective positions of the parties litigating in the court.

Unfortunately, in recent times, the NPP team, led by Hon. Kojo Oppong Nkrumah, has been using the podium offered by the media, to attack counsel representing HE John Mahama in the case, and even going further to incite the court against the former Deputy Attorney General, Hon. Dr. Dominic Ayine.

In addition, many NPP legal commentators in the media, appear to take inordinate delight in belittling and heaping insults on counsel for HE John Mahama and the NDC.

These attacks are characterised by constantly offering misleading comments about our lawyers and the case in court.

We consider this persistent conduct of Hon. Oppong Nkrumah and Henry Nana Boakye and their surrogates as unbecoming of professional colleagues, who have sworn to protect the ethics of their respected profession over and above partisan considerations.

The Supreme Court exists to do justice fairly and squarely to all citizens irrespective of political colours, and to attempt to incite the court against our noble lawyers, is to debase the court's role and duty.

We, accordingly, condemn, in no uncertain terms, this unfortunate conduct of the NPP to demonise our counsel before the Supreme Court.

The truth shall stand.

The truth shall prevail.