History of female running mates in Ghana’s politics. Check out all 11 of them! 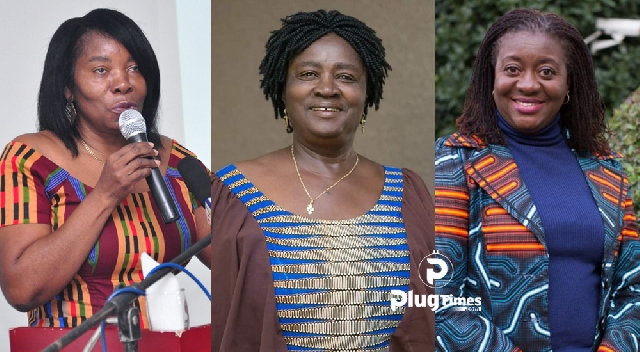 1. 2020: Professor Jane Naana Opoku-Agyeman (NDC). She is running alongside presidential candidate, John Dramani Mahama. She is a former Education Minister (during the presidency of erstwhile president, John Dramani Mahama) and is the first woman to serve as Vice-Chancellor (2008-2012) of a public university in Ghana (the University of Cape Coast). She currently is the Africa Board Chairperson of the Forum for African Women Educationalists (FAWE), a group of which she has been a member since 2014.

3. 2012: Mrs. Eva Naa Merley Lokko (of blessed memory - PPP). She passed on October 6, 2016, after a brief illness. Mrs. Lokko also ran on the ticket of the PPP together with Dr. Papa Kwesi Nduom. Before assuming this role, Mrs. Lokko had served as the first female Director-General of the Ghana Broadcasting Corporation (since its inception in 1935). Mrs. Lokko was a Ghanaian engineer and politician. She was the first woman to be chosen as the Vice-Presidential candidate of the Progressive People's Party (PPP).

4. 2012: Ms. Cherita Nana Akosua Frimpomaa-Sarpong (CPP). She partnered the flagbearer of the Convention People’s Party (CPP), Dr. Abu Sakara Foster. A social worker, philanthropist and daughter of a former organiser of the CPP, Mr. Sarpong Kumankuma, she was the Dwantoahemaa of the Dormaa Traditional Area in the Brong Ahafo Region, bearing the stool name Nana Akosua Frimpongmaa II. She abdicated when she agreed to partner Dr. Abu Sakara Foster in the elections. Ms. Cherita Nana Akosua Frimpomaa-Sarpong also is a former National Organiser of the 31st December Women’s Movement and one of the initial five people who developed the concept for the formation of the movement. She recently made waves when she stated that the Convention People’s Party (CPP) needs a complete overhaul - from the ward through to the constituency, regional and the national executive levels - for a greater impact in Election 2020. She is an aspiring National Chairperson for the party.

5. 2012: Madam Helen Sanorita Dzatugbe Matervi. She ran alongside the People’s National Convention's (PNC's) Hassan Ayariga. At the time, Mr. Sekou Nkrumah, son of Osagyefo Dr. Kwame Nkrumah, said that she was "miles ahead" of the flagbearer, Mr. Hassan Ayariga, and that she should have been the presidential candidate.

6. 2008: Petra Amegashie, running mate to Dr. Edward Nasigrie Mahama of the People’s National Convention (PNC). Madam Amegashie, prior to her selection, had served as a secretary-cum-interpreter with the Bay Water Mining Company and had been picked ahead of four other nominees, including well-known figure, Kofi Wayo. Madam Amegashie was one of only two women Vice-Presidential nominees in the race in the 2008 elections.

8. 2000: The first outing of Petra Amegashie (note that she was given the Vice-presidential slot in 2008 as well, running alongside Dr. Edward Nasigrie Mahama of the People’s National Convention), running mate to Dan Lartey of the Great Consolidated Popular Party (GCPP).

10. 1992: Professor Naa Afarley Sackeyfio, running mate to now Reverend Dr. Kwabena Darko (popularly known as "Akok) Darko" owing to his poultry business, Darko Farms) of the National Independence Party (NIP). The NIP is a defunct political party formed in 1992 in the run-up to the inauguration of the Fourth Republic of Ghana. The party came to an end in 1993 following a merger with another Nkrumahist party. Professor Naa Afarley Sackeyfio is a product of the Holy Child Senior High School and the University of Ghana. She has, for a long while, been a professor of English at the University of Cape Coast.

11. 1979: Lieutenant Colonel Christine Debrah, in 1979, did something daring by running with independent candidate, Dr. Robert Patrick Baffour, OBE, for the presidency. Dr. Baffour was a Ghanaian engineer, politician and university administrator who served as the first Vice-Chancellor of the Kwame Nkrumah University of Science and Technology (KNUST), chairman of the Integrated Iron & Steel Commission as well as the first Chairman of the Ghana Atomic Energy Board. He had been anointed by Dr. Kwame Nkrumah to be his successor. Unfortunately, however, after some disagreements with other party members, Dr. Baffour was expelled from the Convention People's Party (CPP). This led to his running, in 1979, as an independent candidate in the presidential election together with Lieutenant Colonel (rtd.) Christine Kwabea Debrah, a nurse and soldier. Lieutenant Colonel Debrah (rtd.), as a one-time Executive Chairperson of the Environmental Protection Agency, was once named among the "10 top environmentalists in the world." She also served as the first Ghanaian Matron of the 37 Military Hospital; President Nkrumah’s family nurse; Director-General of the then Posts and Telecommunications Corporation of Ghana; member of the National Commission for Democracy and; Commander of the Women’s Auxiliary Corps of the Ghana Armed Forces.

***The first woman to contest for the presidency in Ghana is erstwhile First Lady, Nana Konadu Agyemang Rawlings, who stood for election in 2016 on the ticket of the party she formed, the National Democratic Party (NDP). She garnered 16,935 votes overall, accounting for 0.16% of the total valid votes cast and placed 6th out of 7 candidates, only making it ahead of Jacob Osei Yeboah, an independent candidate in both the 2012 and 2016 presidential elections.