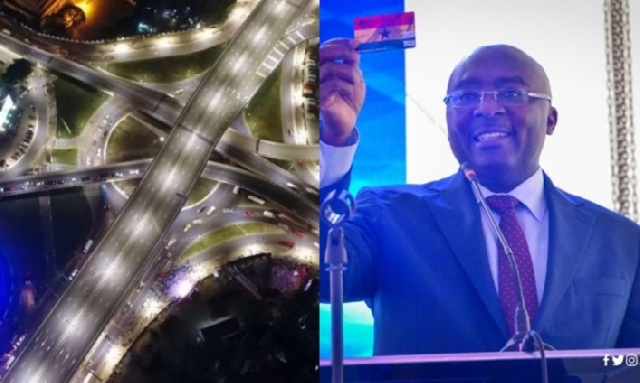 Vice-President Mahamudu Bawumia has said publicly that some people wondered if he had gone mad after he recently said he would prefer the Ghana card to 1,000 interchanges at a public event.

“A few weeks ago, not too long, I was touting how important the Ghana card was – the identification system that we’ve put in place in Ghana – and I even said, for me, at this stage of our development, I would even prefer this to a thousand interchanges. You can imagine the furore this caused: ‘This man, wabodam anaa?’ – To wit: ‘Are you mad?’” Dr Bawumia exclaimed when he addressed the Civil Service Awards ceremony in Accra on 29 July 2022.

He said other people also went like: “‘What is he talking about?’, ‘How could the Ghana card, the system, be so much [more] valuable [than 1000 interchanges?]’”.

Demonstrating, in his view, the validity of his comment, Dr Bawumia said: “I’ll give you a few examples – and it wasn’t said cavalierly – there was thinking to that statement and I want you think about it: for the first time in our history as a country, we have a unique identity system, which is biometric and, so, we can uniquely identify every individual – whether they are alive or dead”.

“So, immediately, if you can uniquely identify each individual, the case of ghost names on our public sector payroll will become a thing of the past, immediately – and I’m working with the Controller and Accountant General; we are doing a lot of good work on the Controller payroll database and cleaning it up”, he said.

Again, he said: “Just a couple of days ago, SSNIT reported finding 27,000 ghost pensions and they were being paid GHS327 million a year”.

“Two institutions; you add a yearly savings that this discoveries have made just in two institutions, GHS441 million. Over ten years, you are talking of over GHS4 billion”.

“This is just two institutions and you can be sure that when we go through every institution, you’ll see that we will be able to eliminate all ghost workers, thanks to the Ghana card”.

The Ghana card is a valid verification document issued by the National Identification Authority (NIA) to Ghanaians and resident foreign nationals living everywhere for the purpose of identification.

The card bears personal information about the individuals whose identity can be verified at all times. The NIA National Identity System utilises three types of biometric technology for identification purposes.

The card contains basic identification information including a photograph of the cardholder, along with a name, date of birth, height, and a personal identification number that has been randomly generated and assigned to the holder and has an expiry date.