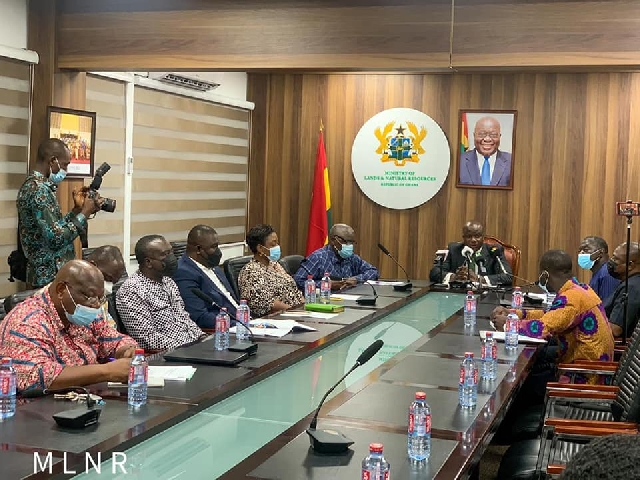 Jinapor and the committee

The Government of Ghana under the leadership of President Nana Addo Dankwa Akufo-Addo is committed to ensuring that the country becomes a fully-fledged member of the Lowering Emissions by Acceleration Forest Finance (LEAF) Coalition and enjoy the full benefits derived by members by virtue of their affiliation with the coalition, Lands and Natural Resources Minister, Samuel Abu Jinapor has said.

According to him, with the country signing a letter of intent to be part of the coalition, it has become necessary for it to explore ways of meeting other conditions precedent for the signing of an “emission reduction purchase agreement”.

Mr Jinapor explained that the signing of the final agreement will permit the country to have access to funding to fight its emission and climate change challenges.

In light of this, the Ministry has set up a committee and commissioned it to work towards the attainment of the set objective.

Launching the committee on Wednesday, November 17, 2021, Mr Jinapor tasked the committee members to bring their experience and knowledge to bear and help government achieve its targets.

“We were successful at signing a letter of intent with LEAF Coalition. Ghana was the only country from Africa to be selected by the panel of experts after the rigorous scrutiny that our application had to be subjected to", he said.

The LEAF coalition is a public-private initiative led by the government of UK, Norway and several global giant companies to raise funding for forest base climate action. Already they’ve raised $1billion.

“The signing of the letter of intent is a major hurdle that a country has to cross before we can get to the point of signing a binding emission reduction purchase agreement. At that stage, we will be able to access some of the funding to be able to prosecute some of our ambitious afforestation programs,” the Minister added.

The Chairman of the Committee who also doubles at the Deputy Minister of Lands and Natural Resources in charge of Forestry, Mr Benito Owusu-Bio welcomed the challenge and assured of sacrifices to help the country satisfy all demands and access the funding.

“The committee would want to assure that we are very grateful for being selected to be members of this important task force.

“We also want to assure you that we’ll hit the ground running and produce a very robust proposal that will enable the government and the ministry be able to access the funding”, he said.