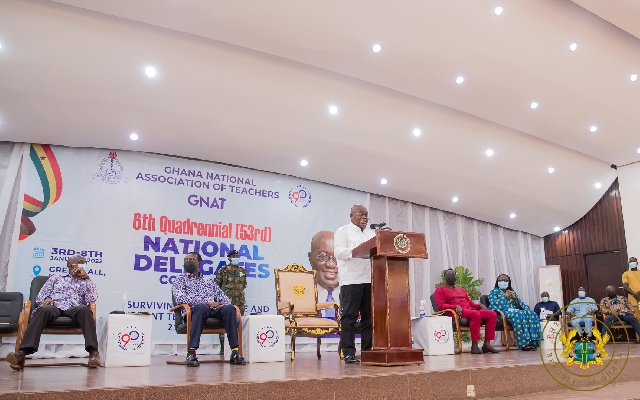 President Nana Akufo-Addo has said he has spent twice as much on education compared to what his immediate predecessor pumped into sector within their respective first four-year terms.

The President, thus, used the opportunity to thank all teachers in the country for the work they did, and continue to do, in ensuring that the education of Ghanaian children, throughout the COVID-19 pandemic, has not been truncated.

“Continuous assessment, the Basic Education Certificate Examination (BECE) and the West Africa Senior Secondary Certificate Examination (WASSCE) have all been written by thousands and thousands of students, under your care and guidance, in conditions of safety and orderliness, and without incident. The nation is extremely appreciative of these acts of selflessness and patriotism,” he said

According to President Akufo-Addo, his vision of a modern, competitive, Ghanaian economy, spearheaded by indigenous entrepreneurs, with productive employment for the great majority of its citizens, requires skilled economic actors, and to get there, the nation needs an educated workforce.

“Through the implementation of the Free Senior High School policy, we are ensuring that value is being added to the intellect of every Ghanaian child. This is our surest way of succeeding in adding value to the Ghanaian economy, thereby helping to create acceptable, well-paying jobs for the young people of our country,” he said.

The President continued, “For us, in Ghana, also to make a success of our nation, we must pay attention to teachers. It is only a group of well trained and motivated teachers that can help deliver the educated and skilled workforce we require to transform our economy and nation”.

Outlining the many initiatives implemented by Government since 2017, he stated that his government has restored, since coming into office five years ago, and continues to pay, teacher trainee allowances, which were abolished by the previous administration.

“In addition to the yearly average increase in salaries over the last five (5) years, my government is, for the first time in our nation’s history, paying a professional allowance to teachers. We have abolished the three (3) months’ pay policy for teachers, we have cleared the arrears, and promotions due teachers have also been effected,” he said.

He stressed that to prevent undue delays in promotion of qualified teachers, Government will, in 2022, improve on the conduct of the aptitude test instituted by the Ghana Education Service, leveraging on lessons learnt from the one conducted in 2021.

“Government is also committed to the development of affordable housing for teachers all across the nation. The current initiative will involve the provision of housing for both mortgage and rental. I am fully aware that one challenge facing teacher ownership of homes beyond finance is their inability to purchase homes where they intend to retire,” he said.

Through a subsidised loan programme, President Akufo-Addo indicated that teachers will be provided an opportunity to own houses in desired locations in various parts of the country, stating that the Ministry of Education is working with the National Service Scheme on this.

In addition, the Ministry of Works and Housing is in discussion with teacher unions to provide more housing opportunities for teachers.

“Within the next two years, it is proposed that ten thousand (10,000) housing units on affordable terms will be developed for teachers across the country. This, as we all know, is the tip of the iceberg, but it is a good beginning,” he added.

Touching on the vexed issue of laptops for teachers, President Akufo-Addo was glad the supply of laptops was appreciated by teachers, and promised that the other related matters of concern will be addressed.

“Good relations between GNAT and my government are matters of importance to me, and I will do my best to promote such relations,” he added.