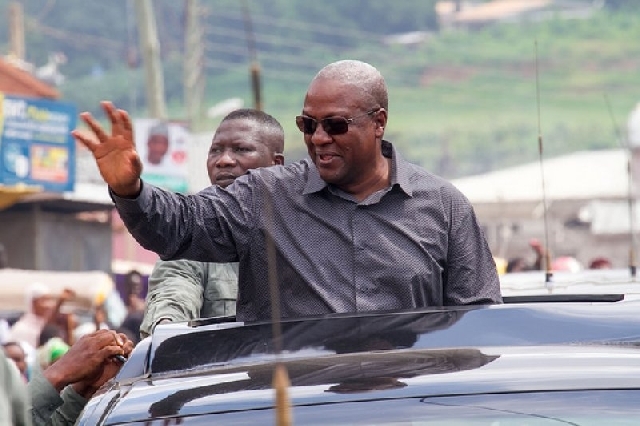 The 2020 flag bearer of the National Democratic Congress (NDC), Mr John Dramani Mahama, will be in the Volta Region today, Monday, 18 October 2021, as part of his nationwide ‘Thank You’ tour.

While in the region, the former President is expected to meet the Agbogbomefia, Togbe Afede XIV, and the Asogli Traditional Council and also interact with religious leaders at Dela Cathedral, Ho Kpodzi.

Mr Mahama will also visit the family of the late Comrade Courage Worlasi Danku and sign a book of condolence in memory of the late Deputy Regional Youth Organizer of the NDC at Sokode Gbagble.

He is also expected to visit the Volta Regional House of Chiefs.

This follows his recent tour of the Central Region, at which he denied ever diverting and stashing some $100 million World Bank funds meant for Ghana into a private Swiss account while in office.

Mr Mahama also denied ever having any foreign bank accounts during the Central Region tour.

In an interview with Cape93.3FM on Friday, 15 October 2021, Mr Mahama said: "They [New Patriotic Party] claimed Lordina and I stole a $100-million cash from the World Bank meant for Ghana. Where did you see that money? World Bank funds go to the Bank of Ghana not the Ministry of Finance. So, how could I have told the Bank of Ghana to give me $100 million and transfer it into my Swiss Bank account?"

"My account is in ADB, Zenith Bank and Guaranty Trust Bank. These three banks hold my money. If you want to investigate me, investigate those banks. My money is all there", Mr Mahama revealed to Ohene Kwame David in the one-on-one interview.

He said so many lies have been hurled at him and wondered why the NPP has not been able to prove any of them even though it now has power.

Concerning the much-talked-about alleged Ford Expedition bribe, Mr Mahama pointed out that the Commission for Human Rights and Administrative Justice (CHRAJ) investigated it and "found nothing" but the NPP has always trumpeted it against him.

"Who gives a Ford Expedition bribe meant for the president to his country's embassy in Burkina Faso?" he asked.

"You could have driven the car into Ghana and said: 'Oh, Mr President, this is a car for you'. But it was presented to our ambassador for onward delivery to me, as a gift, and the embassy officially presented the car to Jubilee House and it was added to the pool of cars at the presidency and was being used by the security operatives there", Mr Mahama explained the circumstances surrounding the gift.

Also, he said: "They claimed I have a hotel in Dubai" but "I've challenged the NPP that we should all go to Dubai and take back our hotel, sell it and repatriate the money to Ghana but they haven't taken up that challenge till today".

Additionally, Mr Mahama said: "They claim Lordina and I own DKM but they are in power now and still have not told us who owns it".

Further, he noted: "They said I've ships in Tokyo Harbour". "They also accused me of running a family-and-friends government" but "only my cousin, Joyce Bawa, was a deputy minister in my government".

"And, so, the lies have been manifold, so, a certain perception has been created in the minds of Ghanaians but look at what is happening today: No investigation of the BOST corruption saga, Agyapa deal, PDS …" he listed.

Mr Mahama also accused the media of being soft on the Akufo-Addo government relative to how they treated his government.

"You, the media, made so much noise during my time but today you're all quiet; you've become women; you can't talk".

He said although the media are good, "their mojo has diminished".

To him, there will always be corruption but the posture of whoever is president in tackling the problem is what makes the difference.

"Corruption has to be fought and uprooted otherwise it will continue and worry the country since individuals will be diverting state funds into their private pockets".

"It is not an easy fight, so, the president must lead the fight and carry his appointees along. But if the president himself is partaking of the corruption, then it will be very difficult to fight it", Mr Mahama said.

"How you fight corruption is the most important thing. There will always be corruption but it depends on how the leader leads the fight against it", he stressed.

The former president noted: "When the presidency becomes a clearing agency for its officials accused of corruption, then other people become embolden to also become corrupt".

He said Ghanaians have named President Nana Akufo-Addo as a 'Clearing Agent' because "he's been clearing all his corrupt appointees".

The former president said, unlike the Akufo-Addo administration, his government dealt decisively with every corruption allegation involving his appointees.

"I wouldn't say there was no corruption in my government; there was corruption but look at how we dealt with it".

He recalled that apart from the National Service Scheme ghost names scandal, which led to the sacking and prosecution of some officials, "I set up a commission of inquiry into GYEEDA and we unearthed a lot of rot".

"My own friend [Abuga Pele] with whom I was in parliament, was prosecuted for it. He was recently pardoned on health grounds by President Nana Akufo-Addo", Mr Mahama mentioned.

To him, the fight against corruption boils down to the leader’s attitude toward it.