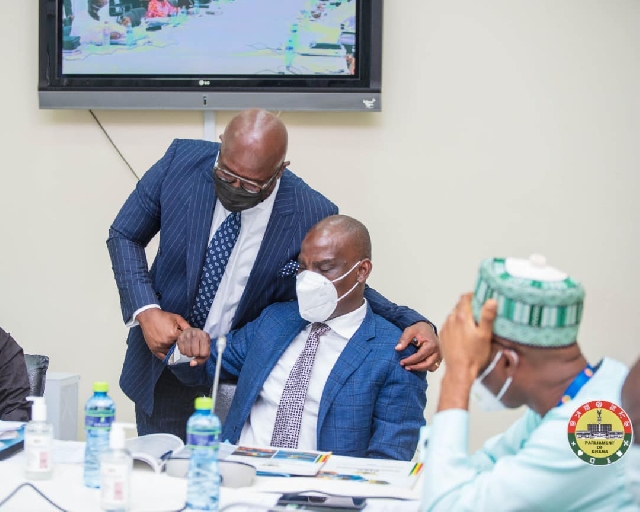 Members of the vetting committee

The first to appear before the committee was the Deputy Minister-designate of Energy and Member of Parliament for Sekondi, Mr Andrew Egyapa Mercer.

Mr Mercer graduated from the University of Ghana with Honours in a Bachelor of Arts in Humanities and Bachelor of Law and later studied at the Ghana School of Law and qualified as a lawyer after passing his bar examination.

The nominee denied any knowledge of a workers’ agitation at GRIDCo but stressed that the current power outages and challenges facing the country were largely because of the stability programme that the power transmission company was rolling out aimed at improving the power sector.

Also, he stated that there was no conflict of interest when he held a position at TG Energy Company, which was later found to be part of PDS, adding that it was appropriate for lawyers to be appointed as directors and secretaries, as well as play their roles as lawyers.

Mr Mercer also indicated that there was no fraud during the suspension of the PDS deal.

According to him, some material breaches had occurred, which were going to be investigated.

On the issue of his nomination coming at a time when TG Energy is in court with the Ministry of Energy, Mr Mercer said he was willing to change his views on some issues of fraud that he initially did not subscribe to.

The next to appear was the second-term Member of Parliament for Assin South, who has an academic background in Mineral Engineering, Economic Policy Management and Foreign Policy.

Rev John Ntim Fordjour holds a Master of Arts Degree (MA) in Economic Policy Management from the University of Ghana, Legon; and Postgraduate Certificate in Governance and Anti-Corruption Methods from Georgetown University, Washington D.C. and is at the concluding stage (5th year) of his PhD in Political Science.

He told the committee that the government, over the past five years, has made major investments in education without compromising the quality.

He informed the committee that the Akufo-Addo government will complete all the abandoned school projects started by his predecessors and noted that the current administration has completed 29 of the E-blocks of the Mahama administration while the intervention of VALCO Trust, among others, was geared toward eradicating schools under trees.

Asked if the free SHS policy could have been implemented differently with regard to infrastructure and funds in some constituencies where there are no classrooms, the nominee replied that the Constitution does not permit discrimination against individuals who seek to access education.

On the issue of the school feeding programme, he said the National Food Buffer Stock has been engaged to address the challenges confronting the supply of food to senior high schools in the country, adding that the necessary stakeholders would be engaged.

The nominee admitted to sacrificing about 400,000 students because of infrastructure, which, according to him, was not the best alternative, hence the reason to introduce the track system while assuring the committee that the issue of infrastructure was being addressed.

After Rev Ntim Fordjour, the next nominee to have been vetted was the Member of Parliament for Tarkwa-Nsuaem, Mr George Mireku Duker, who is heading to the Lands and Natural Resources Ministry.

According to him, about 20 concessions of large mining companies have been ratified by Parliament and admitted that though excavators were being seized, no gold and other resources have been confiscated.

According to the Deputy Minister-designate, the menace of illegal mining or galamsey has not reached a state-of-emergency level.

He, however, admitted that he supported the burning of excavators since he subscribed to the assertion that extraordinary situations called for extraordinary measures.

The nominee said there exist legislation to address quarrying and sand winning and urged the committee and other Members of Parliament to be active in ongoing projects in their various constituencies.

The last to appear for the day was Deputy Minister-Designate of Health, Tina Gifty Naa Ayele Mensah, MP for Weija-Gbawe constituency.

She holds a BA in Public Administration and Masters in International Relations and Diplomacy from GIMPA.

The appointee informed the Committee Chairman, Mr Joseph Osei-Owusu and the leadership of the Committee of how she would assist the sector Minister in carrying out his duties.