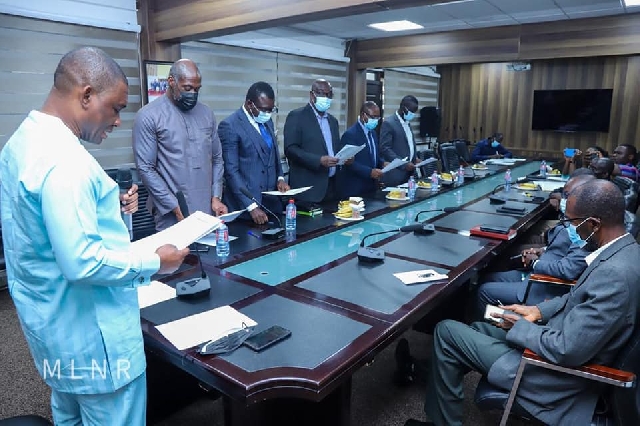 The deputy minister of Lands and Natural Resources in charge of Mines, Mr George Mireku Duker, has sworn in the five members of the Minerals Concessions Audit Committee.

At a brief ceremony on Wednesday, 27 October 2021, Mr Duker told the members that their new role empowers them to protect the mining sector and guard it against any activity with the potential of destroying Ghana’s mineral resources.

“This committee has been vested with the powers to protect the integrity of the mining sector", he said.

He stressed that it is not fair for an individual to own more than 50 or 100 concessions while others have none.

He, therefore, tasked the committee to find out why this is so and also rectify the anomaly.

“You have situations where one person has 50 concessions, another has 100. We believe it’s not fair because we may not have a situation where land will be extended”.

“It is important to know the people who own these concessions and how to handle them,” Mr Duker stated.

The Member of Parliament for Tarkwa Nsuaem stated that the committee has the trust and blessings of substantive Minister Samuel A. Jinapor to perform its oversight responsibilities.

Mr Duker, who inaugurated the committee on behalf of his boss, gave the members an ultimatum of three months to produce the report.

He said that owing to the experience of the chairperson of the committee, he is confident that the committee will succeed.

The Chairman of the committee, Mr Tutu Agyare, welcomed the challenge.

He stated that with the sector undergoing various transformational policies, it is important that the committee is seen to be working effectively.

The other members of the committee are Rosenberg Owusu Donkoh, Ales Oppong, Kofi Adomako Ansah and Michael Atiboly.

Madam Suweibatu Adam will act as secretary of the committee.