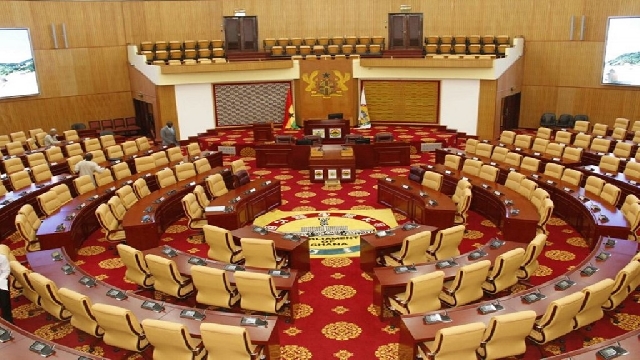 The New Patriotic Party (NPP) Members of Parliament (MPs) arrived in Parliament early on Friday, 15 January 2020 to occupy the Majority side ahead of the resumption of the house.

Some of the NPP MPs revealed on social media, that, they arrived as early as 4 am.

As of 8.30 am, there were over 70 NPP MPs in Parliament although proceedings were not expected to begin until 10am.

The MPs were clad in white.

Parliament is resuming sitting after the House adjourned sitting on January 7 which was characterised by drama during the election of the new Speaker of Parliament.

The election of Alban Sumana Kingsford Bagbin as Speaker and deputy speakers was followed by the inauguration of President Nana Addo Dankwa Akufo-Addo and Vice-President Dr Mahamudu Bawumia for a second term.

The House is expected to finalise which of the two sides form the Majority and Minority.

Three previous meetings held between the leadership of both the NPP Caucus and National Democratic Congress (NDC) Caucus in the House to resolve the matter failed to yield positive results.

The December 7 election saw both the NDC and NPP garner 137 parliamentary seats apiece, with one independent MP, Andrew Asiamah Amoah of the Fomena constituency.

The NPP side thinks that the Fomena MP’s position will mean that they form Majority in Parliament.

“When we met the Speaker three days ago, he determined for us that where the Fomena MP decides to pitch camp will determine where the pendulum will swing,” Mr Kyei-Mensah-Bonsu said at a press conference.

But the leader of the NDC caucus in Parliament, Haruna Iddrisu disagreed with the NPP side.

Mr Iddrisu argued that the independent MP did not intend to join any side of the House.

“Advisedly and wisely, he is not seeking to join a political party and therefore nobody should do the easy mathematics of a 137 plus one, He said.

He, also noted that the NDC side has no difficulty sitting on the left side of the Speaker in the Chamber as long as its numerical strength is considered and made to reflect in the composition of parliamentary committees.

“The composition should reflect beyond mere numbers and include other factors including leadership of committees,” Mr Iddrisu said.