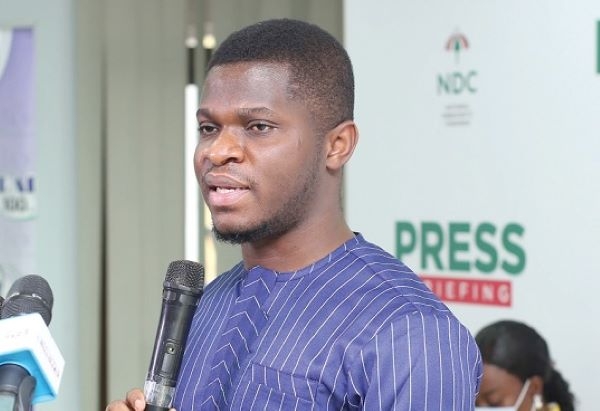 Speaking to Journalists at a Press briefing in Accra on Wednesday, 3 August 2022. Mr. Gyamfi said: “First on the list is without doubt, Ken Ofori-Atta, who has proven to be unmitigated disaster when it comes to economic management.”

In his view, “President Akufo-Addo’s cousin has run down our economy through expensive borrowings but his personal company data bank profits.”

He also condemned the Finance Minister as he compared him to “stale water in a bottle”.

Mr. Gyamfi noted that: “The earlier President Akufo-Addo fires his underperforming cousin, the better for the economy and all of us.”

Regarding Vice-President Bawumia, the NDC Communicator described him as “jocular”.

He slammed Dr. Bawumia, stating: “The once so-called solid Economic Management Team has now become a gracious team who have deserted their roles and are nowhere to be found in these difficult and critical times.

“It is about time our tired, clueless, incompetent and comical Vice President is finally relieved for new ideas and competent hands to take over and steer the Economic Management Team at this time of unspeakable hardships.”