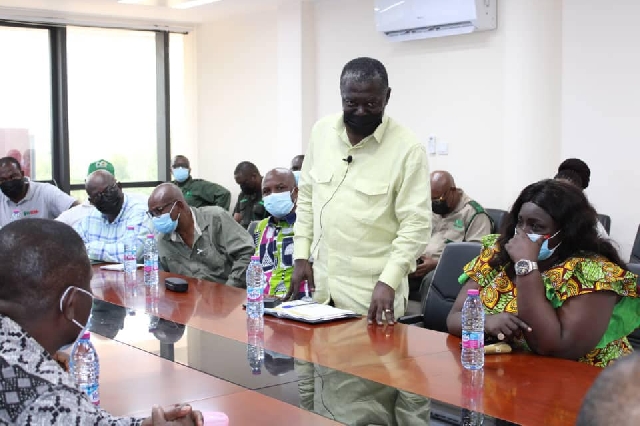 The deputy minister of Lands and Natural Resources, Mr Benito Owusu-Bio, has disclosed that the government of Ghana, through the ministry, will soon set up a regional office for the Minerals Commission in Sefwi Wiawso to help deal with the many illegal mining activities in the region.

He said he is aware that the office in Bibiani is operational but with all the illegalities happening in the regional capital, it is expedient an office is established to deal with the issues more closely.

The deputy minister said this when he met some members of the Regional Security Council (REGSEC) at Sefwi Wiawso in the Western North Region on Thursday, 13 January 2022.

Mr Owusu-Bio also assured them that he will prompt his colleague deputy minister in charge of mines to start a community mining scheme in the area, which he believes will help the situation, as it will give these illegal loggers and miners an alternative source of livelihood.

Addressing the Regional Security Council, the deputy minister announced that his visit follows that of his boss, Mr Samuel A. Jinapor and requested them to put together a list of needs and also ascertain their challenges, particularly with regard to the forest reserves.

He said: "We have come to the RCC because we know you are in charge of administration, security and all others that happens in the region. Our minister has also been here but we are here today specifically because of the forest reserves."

He added that he is aware of some illegal activities ongoing in some forest reserves in the region and, therefore, came to verify the claims and see how best the ministry can help curb the menace.

Mr Owusu-Bio assured the REGSEC that his outfit will liaise with the Omanhene of Sefwi Wiawso to find the best ways to resolve the issues raised.

Nana Bumagama II, the Omanhene of Sefwi Wiawso, who was also present at the meeting, thanked the deputy minister for his assurance of support and promised to donate a full house to accommodate the new Minerals Commission office as and when it is established.

The Chief Director of the Regional Coordinating Council (RCC), who received the deputy minister and his entourage on behalf of the Regional Minister, said REGSEC has had a series of meetings to review their security operations because illegal activities in the reserves are becoming increasingly dangerous, even for the workers of the Forestry Commission.

He disclosed "these illegal loggers operate in many of the reserves, even the ones that share borders with Ahafo Region”.

“They mostly operate during the night and threaten the lives of the Forestry officers when they are seen".

The director added that another issue that needs immediate attention is the reclamation of mined-out areas in the region.

He said it has become dangerous for people living in communities with such pits.

He said they have been trying to help the Commission in some ways, stating that they had plans of organising joint police and military operations in the reserves but due to finance and logistical constraints, they have not been able to execute this plan.

The director was, however, quick to admit that the ministry has already requested a budget from REGSEC to help in that regard and they believe that there will soon be some action.