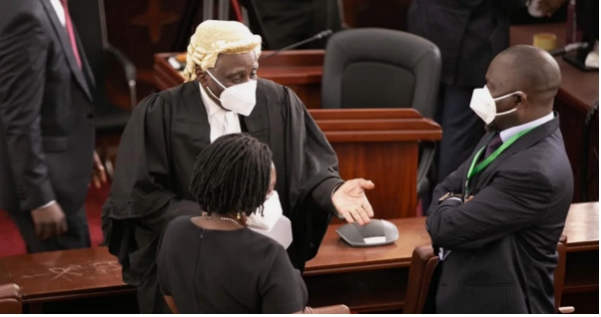 The Supreme Court “prejudiced” its “fair exercise of discretion” in denying former President John Mahama, the petitioner in the ongoing election petition, the opportunity to reopen his case, Mr Mahama’s lead counsel, Mr Tsatsu Tsikata has told the nine-member review panel in court on Monday, 22 February 2021 as he made arguments to buttress his side’s application for a review of the ruling against the reopening of the case.

The ordinary court, on Tuesday, 16 February 2021, ruled unanimously that Mr Mahama could not reopen his case for the sole purpose of subpoenaing the star witness of the EC and using her as an "adverse" witness.

However, Mr Mahama, in his review application filed by his lawyers, said the court committed errors in law in its ruling.

With ground D, he said “our submission is that, here again, the court made no reference whatsoever to Order 38 Rule 10 of CI47 nor indeed, section 58 of the Court Act”.

After a repeat of that question by the same Justice, Mr Tsikata retorted: “I really don’t understand what more Your Ladyship wants by way of an answer. We meant that we had closed our case and subsequently, we sought leave to reopen our case. Your Ladyship cannot say that we are not able, under the rules, under your inherent jurisdiction, to ask for your leave to reopen the case. I don’t believe that that is the suggestion that Your Ladyship is making”.

The Justice replied:  “I don’t think I’ve said any such thing”, explaining: “I just wanted to understand what you meant when you said you had closed your case and I’m satisfied with your answer, sir”.

Mr Tsikata continued: “Very simply put, what we are saying is that, that ruling is completely unreasonable”.

He continued: “We are saying, respectfully that Your Lordships, in the exercise of your discretionary powers, unfortunately failed to avert your minds to relevant statutes, introduced irrelevant considerations which prejudiced a fair exercise of discretion, as required by article 296 of the Constitution”, adding: “It is our submission that holding the first respondent and particularly the Chairperson accountable for the exercise of counts conferred by the Constitution and statute, justify the circumstances of this case that that Chairperson be called upon to testify using the time-tested subpoena procedure that we seek to invoke in this case”.

He then said: “May each of Your Lordships decide in accordance with your conscience and your judicial oath”.

“Ultimately, and even more profoundly”, Mr Tsikata noted, “it is for the Chairpersons of the first respondent to come forward to testify as she indicated on oath she will do”.

“I conclude with prophetic words that were spoken centuries ago: ‘For they have sown the wind and shall reap the whirlwind’. These are the words of the Prophet Hosea to be found in Hosea 8:7. He that has an ear, let him hear”, he said in open court.

Opposing the application, Mr Justin Amenuvor, lead counsel for the Electoral Commission, said the standard set for a review had not been met by the petitioner.

“My Lords, with the greatest respect, the grounds are basically an academic treatise of alleged erroneous pronouncements made by Your Lordships’ panel of seven. Indeed, if we want to give some credit to the grounds, they are, at best, additional grounds that have been filed without leave of your court in terms of an appeal but they do not seem grounds for review for which my Lords should grant this application”, he argued.

He said the petitioners, contrary to their claim that the court has hard done them, they have had a fair hearing even though, in his view, they have rather gone about the case in a “piecemeal” fashion, insisting: “He [Mr Mahama] has been given a fair trial in the way the case has been conducted”.

“It is my submission, therefore, that the petitioner was given every opportunity; he was fairly heard in this proceedings and what has been filed, review number three is an abuse of the court processes and the application ought to be dismissed in limine”, he prayed the Bench.

Joining the opposition to the application was Mr Akoto Ampaw, lead counsel for President Nana Akufo-Addo, the second respondent.

He said: “My Lords, our first submission is that this application woefully fails to satisfy the conditions for the grant of a review application, as in our view, it does not demonstrate any fundamental error committed by the court, which has occasioned the petitioner a miscarriage of justice and on that ground alone, this application ought to be dismissed summarily”.