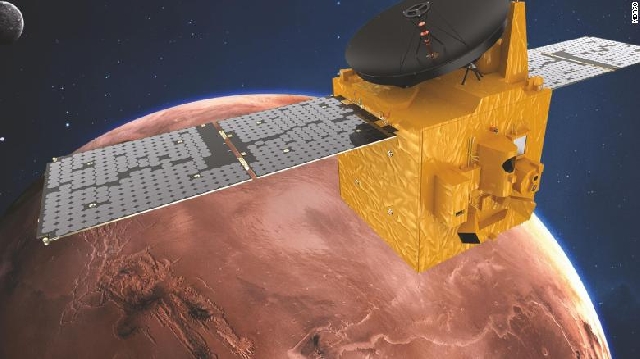 UAE President His Highness Sheikh Khalifa bin Zayed Al Nahyan congratulated UAE citizens and residents and people of the wider region for the success of the UAE’s Hope Probe arrival to Mars in the first-ever Arab interplanetary mission that marks the Arab world’s entry in the global race of space exploration.

Hailing the historic breakthrough, Sheikh Khalifa said, “This historic achievement would not have been possible without the persistence and determination to implement the idea that emerged at the end of 2013 by His Highness Sheikh Mohammed bin Rashid Al Maktoum, Vice President and Prime Minister of UAE and Ruler of Dubai, who followed it up closely until its success.”

He also praised the efforts of His Highness Sheikh Mohamed bin Zayed Al Nahyan, Crown Prince of Abu Dhabi and Deputy Supreme Commander of the UAE Armed Forces, in dedicating all kinds of support needed to make the dream come true. “Thanks to both leaders and the team of scientists and engineers behind the project for proving to the world that the UAE is capable of achieving the impossible.”

Sheikh Khalifa bin Zayed hailed the space project, which was the outcome of solid institutional collaboration and a bold vision that aimed to serve mankind and the international science community.

Hailing the success of the mission, His Highness Sheikh Mohammed bin Rashid Al Maktoum, Vice President and Prime Minister of the UAE and Ruler of Dubai, said: “The Hope probe’s historic arrival to Mars is the greatest celebration of the 50th anniversary of our country. It sets the beginning of the next 50 years with boundless ambitions and dreams.” He added, “Our next accomplishments will be even bigger and greater.”

Sheikh Mohammed bin Rashid noted that “Our biggest success is building national scientific expertise who will contribute to the international science community.”

He added, “we dedicate our Mars achievement to the people of the UAE and the rest of the Arab world. Our success proves that Arabs are capable of reviving the region’s legacy and status in the scientific sphere. We mark our country’s 50th anniversary by our Mars stop, and invite Arab youth to join the UAE’s science movement that marched at high speed.”

Sheikh Mohamed bin Zayed Al Nahyan said: “the Hope Probe’s successful arrival to Mars is an Arab and Islamic achievement that was made possible by the relentless efforts of our youth. The mission marks our entry in the global race to space.” He added that “The probe’s arrival to the Red Planet celebrates our journey of 50 years in the best image that fits the UAE and captures its true story to the world.”

He noted that the “Emirates Mars Mission paves the way for the next 50 years of sustainable scientific development in the UAE. The human capital is the true wealth of our nation. Investing in our people forms the main pillar of all our development strategies and policies.”

Sheikh Mohamed bin Zayed stressed that “the Emirati youth will be the ones leading our development for the next 50 years with their acquired knowledge and skills. The Emirates Mars Mission contributed to building highly-qualified Emirati capabilities equipped to make more accomplishments in the space sector.”