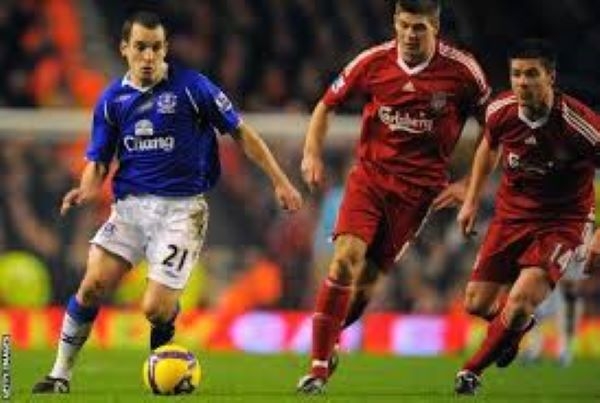 Saturday is 10 years to the day since Everton's last win over Liverpool - a time when the mood was very different at both Merseyside clubs.

This weekend's game is a mouthwatering match-up between the unbeaten Premier League leaders and the all-conquering defending champions, still reeling after losing 7-2 at Aston Villa last time out.

The size of that scoreline was shocking - but a decade ago, any defeat was hardly a surprise for either side. On the morning of 17 October 2010, they were both in the bottom four after losing three of their opening seven league games.

It was the Reds who were suffering the greatest crisis - as well as lying in the relegation zone, they were seemingly at war with themselves. Back then, no-one was proclaiming them as the best team in the world, least of all their own supporters.

Going into the derby at Goodison Park, Liverpool had made their worst start to a season since 1953. They had not only lost at home to Blackpool in their previous match, they had been totally outplayed and booed off the pitch at full-time.

On top of that, they had just suffered a humiliating penalty shootout defeat at Anfield by League Two minnows Northampton in the League Cup, manager Roy Hodgson was receiving abuse from fans just three months after taking charge, and there were also protests against owners Tom Hicks and George Gillett, as John W Henry attempted to push through his takeover before the derby.

No wonder Everton fancied their chances.

'It was a great time to go and win the derby'

"I just remember thinking that they were there for the taking," former Everton midfielder Leon Osman told BBC Sport.

"Without even looking back on everything that was going on with Liverpool then, when I first think back to this game, I just remember that we were very confident. But when you consider what was happening off the pitch, no wonder we thought it was a great time to go and win the derby.

"We had a much better recent record against them then, of course. Our poor record at Anfield was starting to become a thing because it had been 10 years since we had won there - but there was no stigma about us playing them at Goodison Park. Our record there in my time was actually pretty good.

"Before this game, they were struggling and, although we were under par too, we had not got the results our performances at the start of the season had deserved.

"The feeling in our dressing room before the game was that we were going to win and, right from the first whistle, we were on top. Even before we went ahead, it felt like: 'We have got this.'"

That instinct was proved right. Goals either side of half-time from Tim Cahill and Mikel Arteta gave Everton a comfortable victory, with Toffees fans celebrating by chanting "going down" to their rivals at the final whistle.