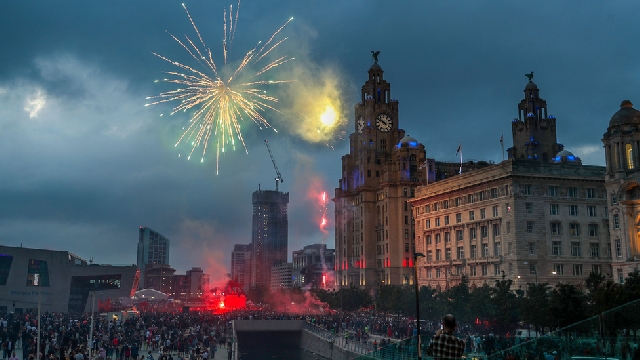 Liverpool FC has condemned the behaviour of some fans who gathered in the city to celebrate the Premier League title win as "wholly unacceptable".

Flares were lit as thousands turned up at Pier Head waterfront despite restrictions on gatherings.

Liverpool FC issued a joint statement with the city council and Merseyside Police, saying: "Our city is still in a public health crisis and this behaviour is wholly unacceptable.

"The potential danger of a second peak of Covid-19 still exists and we need to work together to make sure we don't undo everything that has been achieved as a region during lockdown.

"When it is safe to do so, we will all work together to arrange a victory parade when everyone can come together to celebrate."

Mersey Fire said it quickly extinguished a small blaze on a first floor balcony of the Liver Building.

"There are not believed to be any injuries and the fire is thought to have involved a firework," a spokesperson said.

Mr Anderson told BBC Radio Merseyside he was "frustrated and angry and upset".

He said: "People were urinating in doorways of the Cunard building because people gathered there with cases and cases of beer.

"About 95% of fans have behaved remarkably well, brilliantly, and listened to our pleas not to gather together, and yet there are a tiny minority besmirching Liverpool Football Club's name."

Friday was the second consecutive night that crowds gathered to celebrate the club's first league win in 30 years.

"On Thursday, when they gathered outside Anfield, you could argue that the passion was there and we had to accept that was inevitable," Mr Anderson said.

"But what we saw yesterday was pre-meditated, planned, thought through, and drink played a major part in that.

"That's no [longer] acceptable now in this city."