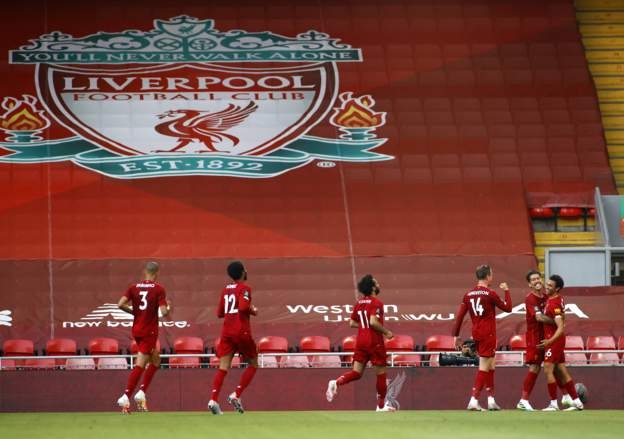 Mohamed Salah believes now is the right time for Liverpool to end their 30-year wait for a top-flight English title.

Salah scored as the Reds beat Crystal Palace 4-0 on Wednesday - a result that leaves them two points away from winning the Premier League.

They could seal their victory on Thursday if Manchester City - the side that pipped them to last season's title - fail to win at Chelsea.

"Since I came here I said I want to win the Premier League. The city did not win it for a long time.

"Last year we had a chance but Man City also played really well and deserved it. It's our time to win the league."

Since then the closest they have come is last season, when Jurgen Klopp's side amassed a remarkable 97 points but were beaten by a single point by Pep Guardiola's City.

This season, the Reds have been unrivalled in their brilliance, with only football's three-month suspension in England because of the coronavirus pandemic delaying their league triumph.

Having drawn at Everton in their first game back and now beating Palace, Klopp's side are on the brink of victory.

"Tonight was a big step, that's clear," Klopp told BBC Radio 5 Live. "We've all still got to play seven games, if we play like this it's really not nice to play against us.

"I have to watch the game tomorrow because we play them one week later. That's being professional and doing my job."

Trent Alexander-Arnold scored the opener from a free-kick before Salah, Fabinho and Sadio Mane added the others.

"It was a brilliant game," added Klopp. "If you are involved in this, if you are as close as I am to these boys, then you can't be happier than I am.

"The way they played, the passion we showed was so exceptional, there were moments that I couldn't believe it. Especially after being 4-0 up and still showing it.

"I'm so happy that we showed that we do it for the people even when they're not really here. In this moment I am in a really good mood."