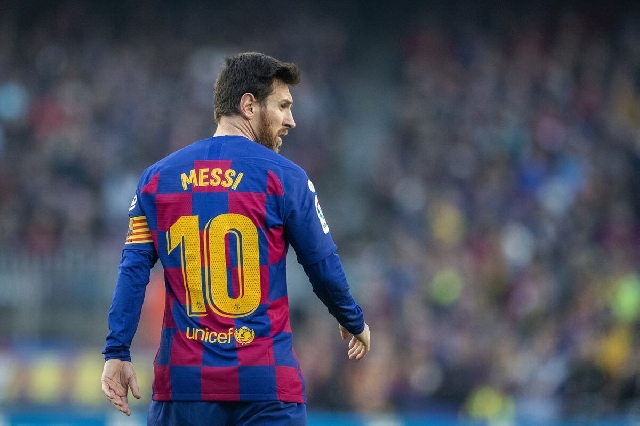 One of the first questions that greeted Pep Guardiola after the announcement of his new two-year Manchester City contract last week was whether it increased the chances of Lionel Messi joining from Barcelona.

"What I want is that he finishes his career there," was Guardiola's response, appearing to pour cold water on the idea.

But whatever the manager says in public, there is no doubt whatsoever that City want the Barca captain and will do all they can to sign him now he knows Guardiola is staying.

In that respect, the new contract could be a game-changer in their pursuit of one of football's greatest players.

Messi will be all ears.

Guardiola and the club's hierarchy accepted as early as April there was a need for a squad overhaul at Etihad Stadium, a view supported this season by the fact they are in the bottom half of the Premier League table after eight games, having won only three times.

Their manager's new contract is likely to make that process significantly simpler.

Last summer City began negotiations with a world-class player they would have loved to bring to the club. The feeling was mutual. "Just one thing before I sign," the player said. "Will Pep be staying at the club?" Guardiola had not committed at that stage.

The message he received was that Guardiola was staying at City until at least July 2021 - the end of his then-current deal - but after that nothing was confirmed, although the likelihood was that he would stay.

The Catalan manager could have said to the player that, indeed, he would be extending his stay and the deal could have been done. He chose not to as he still had not thought deeply about it and as a consequence the player said thanks, but no thanks.

Having made up his mind to stay, it is not surprising Guardiola wanted the news announced as early as possible. Players and officials within the club, as well as many outside it, needed to know, and quickly.

He is staying because he knows this is a squad where, with the exception of five or six players, they will listen to offers for everybody because the group needs to go through a recycling process. More importantly, he has a clear idea that Manchester City will allow him to do it, and do it his way. There is nowhere better for him to work.

The thought process behind Guardiola's decision to extend his stay was not influenced by the prospect of Messi being able to start negotiations with prospective employers from January. However, according to sources close to the manager, when it looked like Messi was going to leave in the summer he called Guardiola to find out whether he was wanted by City. That conversation lasted four hours, with long discussions about what it meant to play in the Premier League, about Manchester and about the required changes to their style to accommodate him, so the relationship is certainly strong between the two men.

But the possible arrival of Messi, as mouth-watering a prospect as it might be for City in particular and the Premier League in general, is still a long way from a done deal, for any number of reasons, chiefly the fact there are many suitors looking to entice him away from the Nou Camp.

City's trump card is that they have Guardiola committed until the summer of 2023, at which point Messi will be turning 36.

We will know sooner rather than later whether a deal is to be done because from 1 January Messi will be free to open negotiations over where he will be once his Barcelona contract runs out at the end of June.

The waters have been further muddied by the resignation of the Barcelona board and the club's impending presidential election, with each candidate desperate to be seen to be doing his level best to guarantee the Argentine stays. In any case, he will not make his decision until he listens to the new president, in place from the 24 January.

What would Guardiola do with Messi if he does sign him? A manager helps the team bring the ball from box to box, then it is up to the players to score the chances created and save the ones conceded. Few sides create as many openings as City but their profligacy in front of goal is there for all to see. Having Messi will help with that. Also, on the biggest of stages - the Champions League - Messi has regularly delivered.

One major plus point now, compared to when a deal was on the cards in the summer, is the money. Had City bought him then it would have involved having to pay a transfer fee, as well as going down the road of litigation with Barcelona.

Even though the message from the English club was that they would not go that way, the message Messi got from other City sources was just the opposite. There are no pending court cases or transfer fees now, and City are capable of making the necessary adjustments to pay the £25m-plus annual net salary it would take to secure Messi.