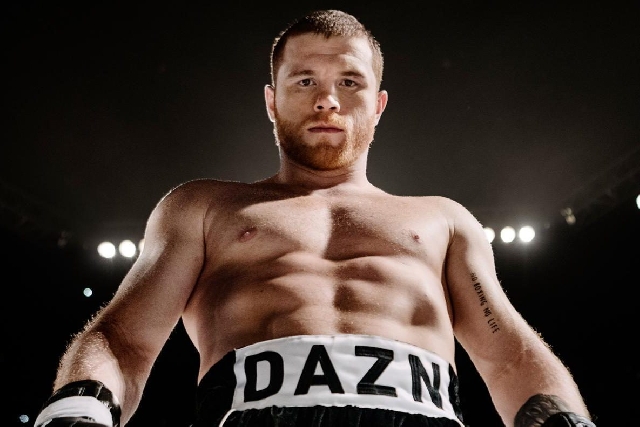 Papers filed with the US district court in California state the Mexican is suing for "breach of the single largest contract in the history of boxing".

The legal papers - seen by BBC Sport - request a jury trial and state DAZN and De la Hoya's Golden Boy Promotions organisation have "broken the promises they made to each other, Alvarez, and boxing fans".

At the time of Alvarez signing his fight contract, those close to the deal said it was one of the most lucrative not only in boxing but in all of sport.

The court documents state that after the first of his 11 fights was completed, DAZN would pay Golden Boy Promotions $40m for each of the remaining 10 bouts and $35m would be passed on to the fighter on each occasion.

Three of the 11 contests have now taken place but with no agreement reached for a fourth, 30-year-old Alvarez claims DAZN replied to a letter sent by his team in June stating the $40m fee would not be paid to Golden Boy Promotions for his next contest.

This alleged lack of payment has prompted him to sue both parties for breach of his contract and he is pursuing "at least $280m" in damages.

The case filings claim that DAZN cited the fact Alvarez had not fought Gennady Golovkin in 2019 as one of the factors in its decision to not pay him for his next bout.

Alvarez claims his original agreement with Golden Boy "did not mention that DAZN would have any right to accept or reject any opponents".

He is therefore taking action against Golden Boy Promotions for fraud-concealment, alleging the company made promises or representations to DAZN that were inconsistent with the contract he signed.

DAZN said it will not comment on legal matters.

Golden Boy Promotions told US media that no-one from the organisation "ever promised anyone that Canelo would fight any specified opponent".

The company added that DAZN is refusing to honour Alvarez's contract by "by not approving the outstanding opponents we have presented to them and by refusing to pay the contractually required amount".

Alvarez has lost once in 56 fights since turning professional in 2005.