Why Brazil’s famous yellow shirt has become a political symbol 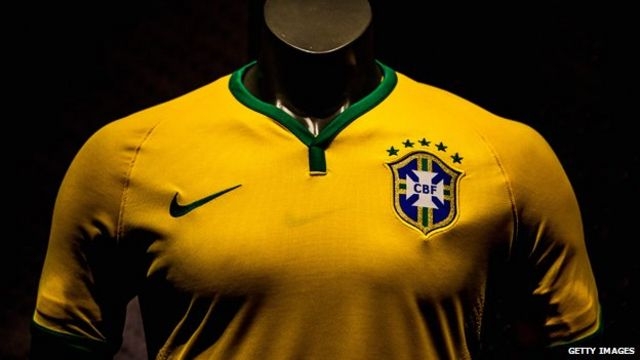 When the much-awaited Brazil 2022 World Cup shirt was released in August, student João Vitor Gonçalves de Oliveira rushed to get his hands on the kit.

The 20-year-old went to the nearest store, grabbed the famous yellow and green top and took it to the till, where he was met with an excited smile.

"The shop owner assumed I support the current government because I was buying the shirt, and started to rage against left-wing candidate Lula," João tells the BBC.

João does not support the government of Jair Bolsonaro, who is standing for re-election on Sunday. But buying the shirt, he realised in the store, could make people think he did.

In order to avoid confrontation, João pretended to be a Bolsonaro supporter. It was another sign that the yellow and green shirt - made famous by Pele, Ronaldo, and many others - has become a symbol of a divided nation. 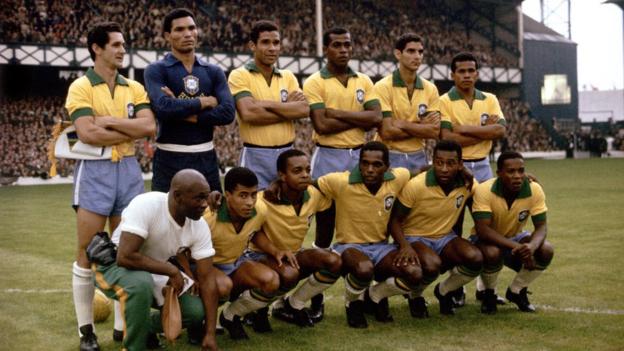 Brazil's football team at the 1966 World Cup in England

"The shirt has become stained with political meaning since 2014," says Mateus Gamba Torres, a history professor at the University of Brasília.

Eight years ago, millions of Brazilians took to the streets to protest against the then-President, Dilma Rousseff, dressed in the colours of the flag as they demanded the left-winger's impeachment.

Then in 2018, the colours were again used by the current president - far-right Jair Bolsonaro.

This year too, green, yellow and blue are the key colours at Mr Bolsonaro's rallies, with people wearing T-shirts, the national flag and accessories.

"The green and yellow shirt has become a symbol of those related to Bolsonaro's government," Mr Gamba Torres says, "which means a good part of the population no longer identify with it." 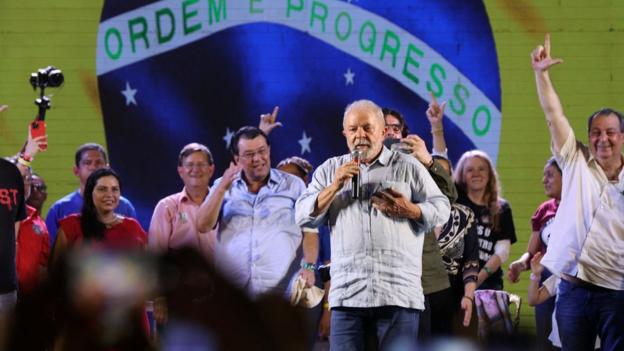 João's encounter with the shop owner is not the only reason he is now hesitant to talk politics. In Brazil, political disputes can seemingly get deadly.

Before he died, Mr Arruda retaliated and shot his alleged attacker - who spent some time in hospital before being sent to prison, where he awaits trial.

And on 9 September, 44-year-old Benedito Cardoso dos Santos was allegedly killed by a colleague, following a heated political discussion between the two. The 22-year-old suspect remains in police custody.

Tech programmer Ruy Araújo Souza Júnior, 43, tells BBC News he will only wear the shirt at home, to avoid being mistaken for a Bolsonaro supporter.

If ex-President Lula wins the election, he hopes the shirt will "once again unite us and symbolise true love of our country, not a political party".

Left-wing candidate Lula has focused on "reclaiming" the flag. Several of his supporters, such as singer Ludmilla, Brazil's first Grammy winner Anitta, and rapper Djonga, have made a point of wearing the shirt during their performances.

Djonga, who was part of Nike's official campaign for the Brazilian World Cup kit, told a crowd at one concert that wearing the shirt in public was an act of protest.

But it's not just Mr Bolsonaro's opponents who are wary of wearing the shirt.

But due to the tense environment between voters, she says, she is "afraid to wear it on voting day". 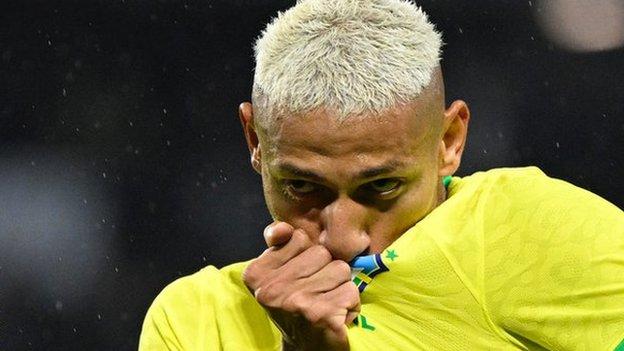 Richarlison celebrates scoring in a friendly win over Ghana in September

But what do the footballers themselves think of the shirt becoming a political symbol? Brazil and Tottenham forward Richarlison says the connotations disconnect Brazilians from the shirt and the flag, taking away part of the country's shared identity.

"As a fan, player and Brazilian, I do my best to spread the identification we have with them to the whole world. I believe it's important to recognise that we are all Brazilians and have Brazilian blood [above anything else]."

And Nike's advertising campaign for the new shirt features personalities from different sides of the political spectrum - focusing on togetherness as its main topic. The shirt, Nike says, is "collective. It represents more than 210 million Brazilians. It's ours".

The brand also banned the customisation of shirts with political references or religious terms. Yet many Brazilians still chose to purchase the blue away shirt instead, which sold out a few hours after its release. 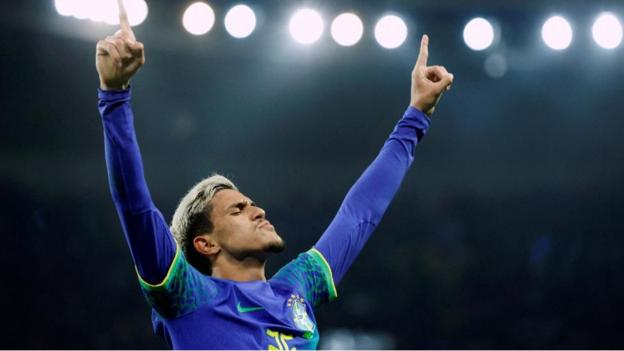 Pedro in Brazil's new blue shirt, after scoring against Tunisia in a friendly this week

Futsal (a form of indoor football popular in Brazil) coach Matheus Rocha, 28, tells BBC News he has decided to wear the blue shirt this year.

"I don't feel any desire to wear the yellow shirt," he says. "Actually, the idea of wearing it repulses me, I don't even take my old ones out of my drawer. It's a shame, because the shirt itself is gorgeous."

He says the same sentiment was shared among his friendship group and colleagues. "RIP yellow shirt," he says. "And I hope Brazil wins its sixth World Cup title in blue for the people."

Although many share Matheus's sentiments, the shirt is still popular with other football fans across the country.

Supporter group Movimento Verde e Amarelo (Green and Yellow movement) thinks the World Cup will help get Brazilians back behind the yellow shirt.

"We don't agree with those who insist the Seleção's yellow shirt is dead, it's just sad to see it being used as an excuse for political clashes," says Luiz Carvalho, founding member of the group.

"It makes no sense to say the yellow shirt doesn't represent this or that politician when the whole idea behind it is exactly the opposite," he adds.

"When our team enter the pitch, so does the pride we have as Brazilians. So whatever happens in the October polls, the love we share should prevail, as it always did." 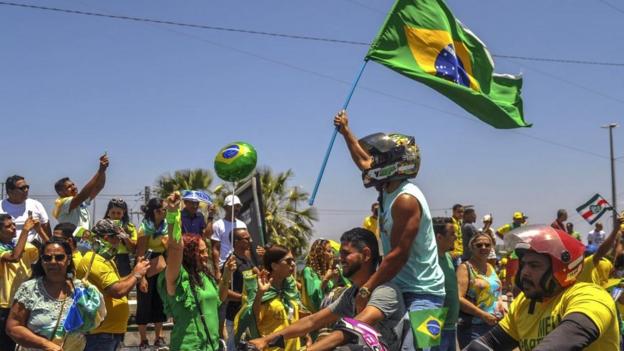 At a rally for President Bolsonaro on Tuesday, the national colours featured heavily

And yet, for some Bolsonaro supporters, the shirt has become an even bigger symbol of patriotic love - taking on a new life during his government.

"There was no sense of patriotism before Bolsonaro's government, because leftist governments don't wear our flag," Adriana Moraes do Nascimento, 49, tells the BBC.

"Thank God our president loves Brazil and he has saved these values for us."

To Adriana, the shirt used only refer to football and now shows love for the country.

"If the left wins the election, the flag will disappear once again," she says. "Have you ever seen a flag in their hands? No. But that is not going to happen, as President Bolsonaro will win."

This is the first time Brazil's presidential election has been so closely aligned with the World Cup, both in its timeline and in social discussions.

Professor Gamba Torres says Brazilians need to disassociate the shirt with politics. "A shirt is just a shirt," he says.

"Of course it has meanings, but it ultimately doesn't represent one specific government. Governments come and go, but our country and our team will always exist."