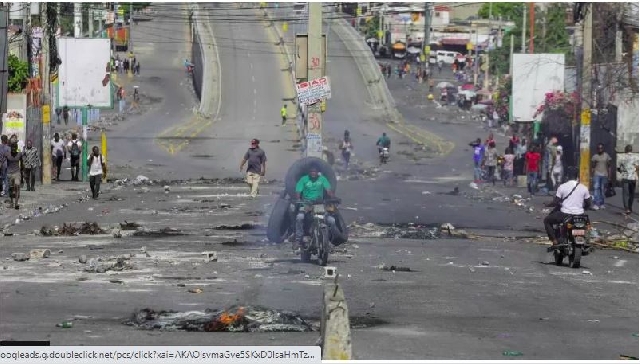 A chronic gang, economic and political crisis has led to a humanitarian catastrophe in Haiti, the country's UN envoy has said.

In protest of the dire situation, businesses have closed and transport services are not running.

Civil unrest across the island escalated after he announced an end to government fuel subsidies on 11 September, which caused petrol and diesel prices to skyrocket.

Since then, protests and looting have intensified, with the capital, Port-au-Prince, at the heart of it.

Ms La Lime told the UN Security Council on Monday that an estimated 2,000 tonnes of food aid, valued at close to $5m (£4.6m), were lost following repeated attacks on local warehouses of the UN Food Programme.

"That would have collectively supported up to 200,000 of the most vulnerable Haitians over the next month", she said.

World Food Program's (WFP) executive director Valerie Guarnieri, who was also at the meeting, said: "The situation in Haiti has sadly reached new levels of desperation".

Inflation has risen to its highest level in a decade, and 40% of the country is relying on food assistance to survive, she said.

And Ms Guarnieri added that she expects food security to deteriorate further this year, with 1.3 million people in a state of emergency due to the crisis.

Criminal gangs are at the centre of Haiti's problems, and chronic gang violence has left hundreds dead and thousands displaced.

Rates of gang violence, which had already shot up since the assassination of President Jovenel Moïse by mercenaries a year ago, have reached shocking new levels since a battle erupted on 8 July between two criminal alliances, known as G9 and G-Pèp.

But Haiti's Foreign Minister Jean Victor Geneus told the UN Security Council that apart from some "isolated cases", violence in his country was "generally under control" and calm had returned to parts of the island.

At the meeting, Mr Geneus called on the international community to provide Haiti with "robust support" to ensure the police can fight against armed gangs.