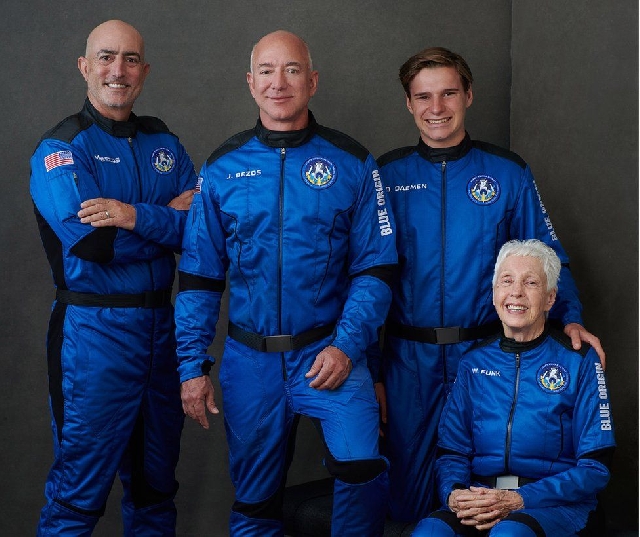 Billionaire Jeff Bezos blasted into space on Tuesday, in the first crewed flight of his rocket ship, New Shepard.

He was accompanied by Mark Bezos, his brother, Wally Funk, an 82-year-old pioneer of the space race, and an 18-year-old student.

They travelled in a capsule with the biggest windows flown in space, offering stunning views of the Earth.

The passengers included the oldest person who has been to space - Ms Funk - and the youngest, student Oliver Daemen.

The spacecraft lifted off at 14:12 BST (09:12 EDT) from a private launch site near Van Horn, Texas. They parachuted back down to the West Texas desert 11 minutes later.

After the capsule touched down, Bezos said: "Astronaut Bezos [his callsign]: Best day ever!"

Two minutes into the flight, the capsule separated from its rocket and continued upwards towards the Karman Line - the most widely recognised boundary of space, 100km up.

The passengers experienced about four minutes of weightlessness, and were able to unstrap from their seats to float around and enjoy the views of our planet far below.

"People who have been up - astronauts - say they can see how fragile the Earth is," Bezos said before the flight.

"Oh my word, look at the world," Ms Funk said as she marvelled at the views.

Before the flight, she had said she was looking forward to performing somersaults and tumbles in microgravity.

In the 1960s, Ms Funk was one member of a group of women called the Mercury 13. They underwent the same screening tests as male astronauts, but never got to fly into space.

Mr Bezos said: "Wally can outrun all of us. During the Mercury 13, she was better than all the men and I can guarantee that's still true today."

After the capsule reached a maximum altitude of around 106km (350,000ft), it began its descent, parachuting down to a soft landing in the desert.

Bezos recently resigned as chief executive of Amazon, the e-commerce giant he founded, in order to concentrate his other ventures, including Blue Origin.

His brother Mark, 53, is a senior vice president at Robin Hood, a New York-based charity.

The fourth passenger is the son of financier Joes Daemen, who founded Dutch private equity firm Somerset Capital Partners. Oliver had originally secured a seat on the second flight, but was drafted in to replaced the anonymous winner of a public auction.

This unnamed winner, who paid $28m (£20m) to join Bezos on New Shepard's first crewed flight, had to pull out "due to scheduling conflicts".

Bezos and Branson have been criticised on social media, with users arguing the money for space could be put to better use - such as tackling climate change or helping the world recover from the pandemic.

Sir Richard has addressed the criticism, saying: "I can understand it, but I think maybe they're not fully educated to what space does for Earth."

He explained that satellites were monitoring "the degradation of the rainforests, monitoring food distribution - even things like climate change," adding: "We need more spaceships going up to space, we don't need less."