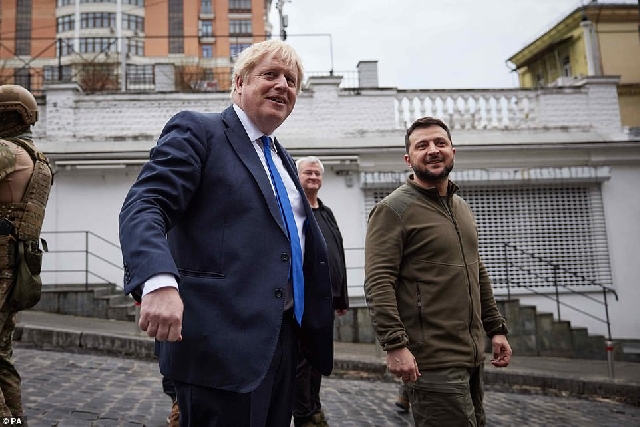 The UK will provide an additional £1bn in military aid for Ukraine, a near-doubling in its support for the fight against the Russian invasion.

The new funding takes the military aid given to Kyiv to £2.3bn - and the UK has also spent £1.5bn in humanitarian and economic support for Ukraine.

Mr Zelensky told Nato leaders the monthly cost of defence for Ukraine was around $5bn (£4.12bn).

The UK is second only to the US in terms of military aid for Ukraine - the US recently approved a $40bn (£33bn) package of support.

Initially, the UK supplied Ukraine with anti-tank missiles, but now it is providing more heavy weaponry.

The new £1bn is set to come from departmental underspends, the UK government said, plus £95 million from the Welsh and Scottish governments' budgets.

An "underspend" means departments spent less than anticipated, not that government finances were in surplus overall. Public sector borrowing was £151.8bn in the year ending March 2022, according to the Office for National Statistics.

Announcing the extra support, the government claimed the equipment was the first step to helping Ukraine recover territory lost to Russia, on top of their "valiant defence".

But questions remain about whether the aid will be sufficient.

Addressing Nato leaders at their summit in Madrid on Wednesday via video link, Mr Zelensky said they needed more modern weapons systems and artillery to "break the Russian artillery advantage".

"Russia still receives billions every day and spends them on war. We have a multibillion-dollar deficit, we don't have oil and gas to cover it," Mr Zelensky said.

"As Putin fails to make the gains he had anticipated and hoped for and the futility of this war becomes clear to all, his attacks against the Ukrainian people are increasingly barbaric.

"UK weapons, equipment and training are transforming Ukraine's defences against this onslaught."