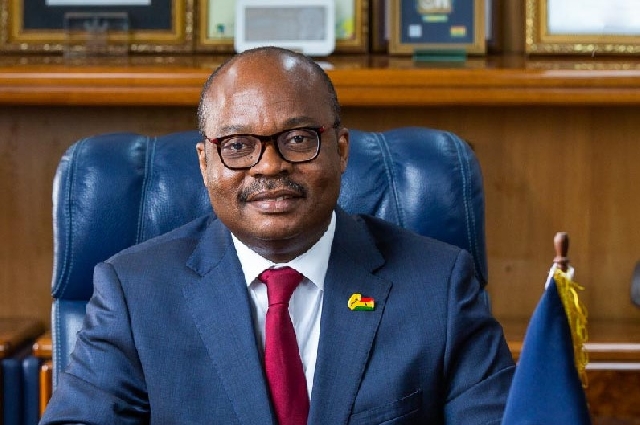 The Bank of Ghana (BoG) has maintained the October policy rate at 16 per cent for the fifth time running.

At a press conference on Monday, 25 November 2019, the Governor of the BoG, Dr Ernest Addison, said: “The latest forecast shows that inflation will remain within the target band over the forecast horizon, barring any unforeseen shocks. Inflation expectations, derived from the surveys, remain fairly anchored in single digits and core inflation (excluding energy and utilities) is expected to remain at low levels.

“In view of the Committee’s assessment, risks to the inflation outlook were broadly balanced, therefore, the Committee decided to maintain the policy rate at 16 per cent while monitoring developments going forward.”

Dr Addison explained that the Monetary Policy Committee (MPC) noted the synchronised growth slowdown across advanced economies and its potential spillover effects on emerging market and developing countries contributed to the maintenance.

In addition to subdued inflation, he said, recent assessments indicate that the global economy is in a low-growth and low-interest rate environment.

Dr Addison further stated that: “In the domestic economy, the indicators of economic activity are exhibiting strong trends. The Banks’ Composite Index of Economic Activity (CIEA) has shown steady growth alongside favourable business and consumer sentiments.

“GDP growth is projected at 7.0 per cent at year end, supported by expectations of increased production in the mining sectors, and the continued implementation of growth-oriented government flagship projects. Private sector credit growth is rebounding and will support growth in the outlook.

“The external sector position remains strong. The trade account has recorded large surpluses for two consecutive years, with the first three quarters of 2019 following the same trend. This has contributed to further narrowing of the current account deficit and improved prospects for additional reserve build-up of about US$1.0 billion by the end of the year. This should provide strong buffers to withstand external sector vulnerabilities in the year ahead.

“The strong external position and improved foreign inflows have supported the local currency’s movements against the major trading currencies. Some relative stability was achieved in the third quarter on the back of inflows from the mining sector and remittances.”