This was just a warmup; I’ll be back – Usher to Ghana

Usher Raymond IV on the 2022 Global Citizen Festival at the Black Star Square in Accra, Ghana

American RnB superstar Usher Raymond IV has given his word that he will return to Ghana because his 2022 Global Citizen Festival performance at the Black Star Square in Accra was just a warmup.

He said this to TV personality Berla Mundi during a meet-and-greet organised on Sunday, 25 September, 2022, for him, a day after his sterling performance.

“By the way, it was so hard to pick the songs,” he first divulged to Ms Mundi as they conversed as seen by Class News’ Prince Benjamin in an Instagram video posted by the handle @berlamundi.

“And then, by the way, we made a change right before the show started to try and add more things,” Usher elaborated.

“This was just a warm up,” he added before assuring, “I’ll come back, of course.”

“I’m gonna manage to create some things…” he went on.

As a headliner for the tenth Global Citizen Festival which took place in Accra, Ghana, and simultaneously in New York City, USA, Usher started his set with his ‘Caught Up’ hit.

During his near-hour song and dance set, he invited on stage Nigerian stars Oxlade, Tiwa Savage and Pheelz to also entertain the crowd with their hits.

The climax was when he was joined by dancers from the biggest urban dance school in Ghana called Dance With A Purpose Academy, alias DWPAcademy, to put up an electrifying performance.

They ended the dance session with the shot below before exiting the stage. 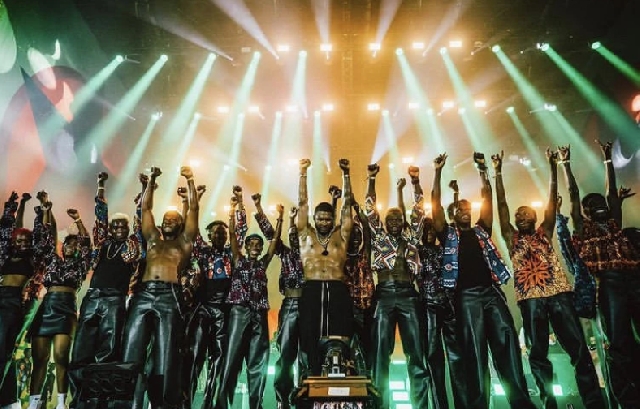