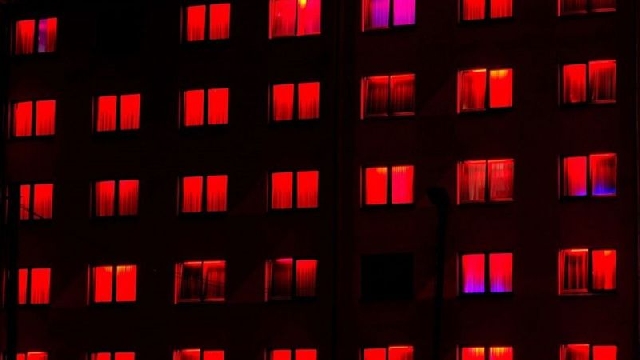 Pascha is a major landmark in Cologne

One of Europe's largest brothels has filed for bankruptcy, after being hit by Germany's anti-coronavirus measures.

The 10-floor Pascha is a major landmark in the city of Cologne. "We are at an end," the brothel's director, Armin, told local paper Express.

Prostitution has been outlawed in the state of North Rhine-Westphalia since the outbreak of the virus.

Some 120 prostitutes usually work at Pascha. It employs around 60 staff including cooks and hairdressers.

Mr Lobscheid criticised the German authorities' handling of the pandemic - particularly their ability to be clear when the business would be allowed to resume.

He said officials would tell them every two weeks that they would not be able to reopen.

"We can't plan like that. We might have been able to avert bankruptcy with the help of the banks if we had been promised that things could start again at the beginning of next year," he said.

People have still been selling sex during the pandemic but without taxes being paid, he added.

In 2006, Pascha made headlines when a group of Muslims threatened violence over an advert on the side of the brothel showing flags of the 32 countries in that year's World Cup, including Iran and Saudi Arabia, next to a semi-naked woman.

Some groups have raised concerns that closing legal brothels could leave prostitutes in greater danger as they are forced to operate underground.