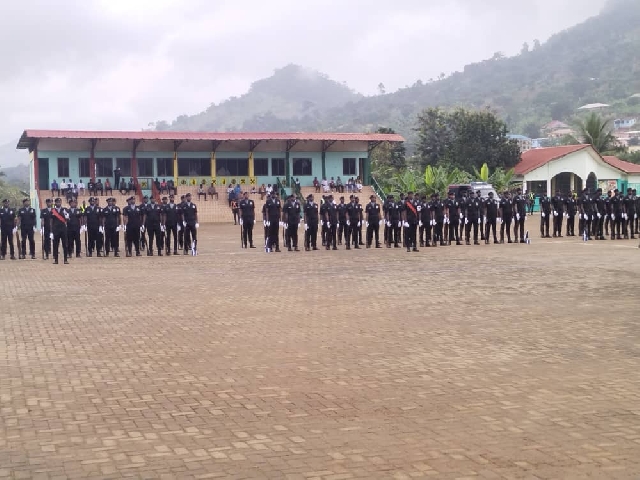 One hundred seventy–one general police recruits from the Koforidua Police Training School in the Eastern Region passed out at a colourful ceremony held at the regional capital, Koforidua on Friday, September 16, 2022.

The recruits had six months of training in various police training regimes including swimming and riding a motorbike.

The passing out of the general recruits forms part of the total number 1, 372 that passed out last Friday nationwide.

Awards were presented to deserving recruits while Mr Solomon Martey picked the overall best general recruit for the second batch of recruits passed out in 2022.

Speaking as the review officer for the passing out ceremony, Commissioner Of Police(COP) Madam Habiba Akyere Twumasi Sarpong, the  Director–General, Welfare at the Police Headquarters in Accra appealed to the recruits to be ambassadors of the modern police training modules to help deal with current crime trends in the country.

She gave the assurance that the police administration under the leadership of Inspector-General of Police, Dr George Akufo-Dampare is ready to deal with any challenges likely to threaten the peace of the country.

He called on the recruits to ensure the human rights of the members of the public.

She reminded them to show some civility when dealing with the general public.

She said this batch of recruits has been trained in disaster management, crowd control and high-risk operations.

‘As part of the training police regime, recruits were sent on attachments to experience practical simulation exercises, she revealed.

She explained that these are all part of the measures by the IGP to revitalize the police and its visibility exercises.

This is to prepare personnel to respond to the acts of terrorism adequately and to deal with any eventuality, she maintained.

The current police hierarchy recognizes the role of the public and to foster a good relationship with the public is ensuring mater servant relationship,she told the recruits.