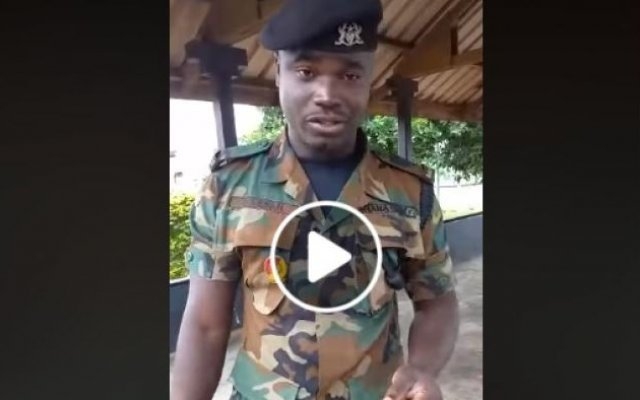 The Economic Fighters League (Fighters) has appealed to President Nana Akufo-Addo to pardon 201766 L/Cpl Wassah Lincoln Isaac, the soldier who was captured on video campaigning against the construction of the 450-seat chamber for parliament estimated at $200 million.

The soldier was stripped of his rank and sentenced to 90 days in prison with hard labour at the guardroom.

L/Cpl Wassah of the 2 Recce squadron unit in Sunyani had called on officialdom to drop the idea of building a chamber for parliament and rather channel the resources meant for that into eradicating under-tree schools, among others.

However, the Fighters believe the soldier does not deserve the punishment meted out to him, as he verbally expressed the opinion held by the majority of Ghanaians without any violence.

The petition, signed by Fighter-General Hardi Yakubu, said the group wants to “request for the exercise of the prerogative of mercy in respect of Lance Corporal Wassa, who is being held in Recce Guardroom at Burma Camp for adding his voice to a campaign to save the nation $200 million dollars”.

In the opinion of the Fighters, “Lance Corporal Wassah demonstrated bravery in speaking out for his country when it was clear that well-meaning people could not keep quiet. You will remember that in your inaugural speech as President of the country, you charged all Ghanaians to be citizens and not spectators. Unless this charge excluded officers in uniform, it is our position that the young soldier was being a citizen”.

The group added that Mr Akufo-Addo “should be worried that a soldier in uniform will have the need to voice out the way Lance Corporal Wassah did”.

For them, the action of the soldier is not “indicative of indiscipline among young soldiers” but rather a demonstration of “discipline by not using his gun to cause mayhem but by choosing to speak out”.

“You should, however, be worried that for decades now there is a system in place where discipline has come to mean being a spectator of unaccountability, of lack of freedom, of lack of social justice; a system where the economy serves the luxuries of a few rather than the necessities of all; a system where justice is only for those who can afford; a system where the gap between the poor and the rich keeps rising; a system, which keeps leaders out of touch with the people they are supposed to serve. It is a cause and effect issue and the young soldier’s act is just the effect of a much deeper cause. In fact, our visit to the Burma Camp revealed deeply held grievances of some young soldiers even concerning their living conditions. A wise man looks at where he tripped not where he fell,” Mr Hardi added.